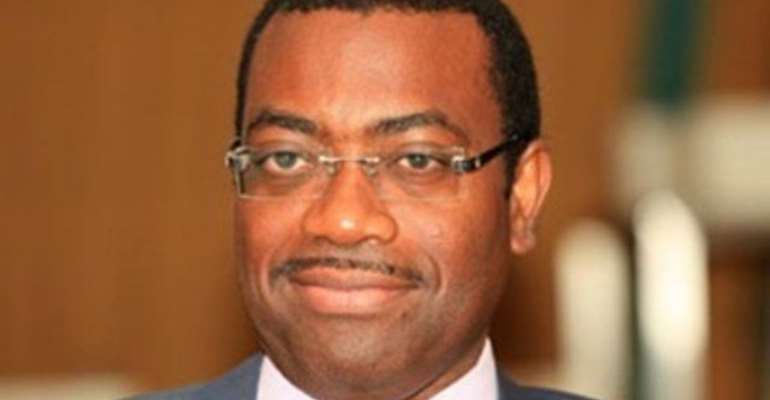 Abidjan, May 29, GNA - Dr Akinwumi Adesina, Nigeria's Agriculture Minister, was on Thursday elected as the President of the African Development Bank (AfDB) during the bank Group's 50th Annual Meetings in Abidjan, Cote d'Ivoire, where AfDB is based.

Dr Adesina, 55, a development economist with a PhD from Purdue University in the United States, would take over as the eighth president, from the current President, Donald Kaberuka of Rwanda, whose second term ends on August 31.

He said after beating seven other contestants 'I salute the excellent work of President Kaberuka. It will be a big challenge for me to step into his shoes. He leaves a solid Bank behind him.'

"I want to assure you that, as President of the Bank, I will be a responsible President," Dr Adesina said.

"I will be focused and I will work with you to build upon the tremendous work of President Kaberuka."

The out-going AfDB President Kaberuka said 'To my incoming successor, my very best wishes. Ten years goes by very quickly. It is a complex and merciless job, but very exciting. It is, in fact, not a job-but a mission.'

He said 'I am confident that my successor will be able to take the Bank to the next level."

member-states. It is financed by both Africa nations and shareholder countries outside the continent.

Recent years have seen a huge jump in lending to Africa from non-traditional partners, particularly China. And since 2011, more than a dozen African countries have issued their first international sovereign bonds.

The bank estimates that Africa needs annual infrastructure investment of around 100 billion dollars over the next decade.

AFDB maintained its sound financial standing under challenging global and regional economic conditions, maintaining an AAA and AA+ from rating agencies, reflecting its strong capital base, the firm support of its shareholders, and its prudent financial and risk management.