Why Ghana And Rich Countries Need To Think About Climate Refugees 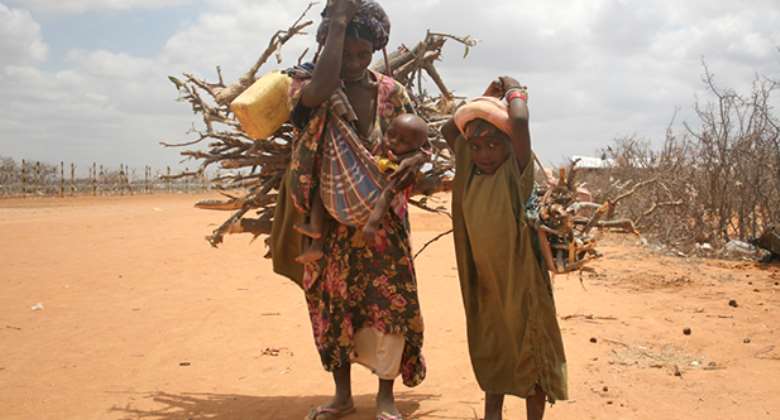 Memunatu, a 12-year-old primary school graduate hailed from a small industrial town in the northern part of Ghana, where 80% of the people are into agriculture and yet the most erosion prone in the country, occurrence of drought, flood, high temperature, low organic matter content and high level of environmental and land degradation are some of the challenges that the community face.

There was a heavy rainfall in that community which led to the displacement of their two acreage farmland, Hens, guinea fowls, doors, furniture - everything got smashed, her father who was then in maize farming committed suicide due to unpaid loans leaving the mother with two children. She wept bitterly in sorrow for the dead husband asking herself “what will become of me and my two children?”, finally the mother became blind.

Memunatu being the elder’s child of her parents had to quit schooling and move with her mom and sibling to the southern part of Ghana thinking life will be better in order to fend for her blind mother and her younger sister. The mother and her two children became victims of climate change and technically termed “climate refugees”. Now the question is “What would life become of them now that they left for the south with nothing? What is the role of the government of such victims of climate change”?

What is Climate Change Refugee or Environmental Migrants?

Environmental migrants are persons or groups of persons who for compelling reasons of sudden or progressive changes in the environment that adversely affect their lives or living conditions are obliged to leave their habitual homes or choose to do so either temporally or permanently and who move either within their country or abroad. The term climate refugees refers to the subset of environmental migrants forced to move due to sudden or gradual alterations in the natural environment related to at least one of three impacts of climate change: sea level rise, extreme weather events, droughts and water scarcity.

Who are Climate Refugees
Climate change is creating millions of climate refugees - people forced from their homes and land by rising temperatures, droughts and famine, sea level change, and extreme weather events including floods and storms. Many are among our planet’s poorest and most vulnerable people, those who have contributed the least to our changing global climate but have become the first victims of our failure to prevent climate change. Climate change is also being recognized as a significant threat to global peace.

A striking phenomenon of climate change is climate-induced displacement. Every year, around the globe, millions of people are being forced to move or flee to natural hazards in their environments and many of these risks relate to extreme weather situations. Climate change is making matters worse by increasing the intensity and frequency of important drivers of displacement such as droughts, floods and other extreme weather events.

Movement in responds to climate change is a normal human adaptation strategy. According to scientific estimations, the number of those likely to relocate due to climatic reasons-see level rise, increased water scarcity, desertification etc- ranges between 350 million by 2050.

Antonio Gutteres of the United Nations high commissioner for refugees says “what we are now seeing are more and more people that are forced to flee because of lack of water, because of lack of food, because of extreme poverty and many of these situations are enhanced by climate change.”

The short rainy season covering about five months of the year from May to September, results in a prolonged off season period during which farmers remain largely idle. During this period, young people seek occupations elsewhere in Ghana, most of the youth from the northern regions in particular move away to farming areas in the south such as Brong Ahafo and Ashanti Regions where the raining season is long and farming activities more prolonged to work on the farm lands. Also each year, the people are plagued with various weather related challenges that causes them to migrate. They often move to southern Ghana in Particular where they engage in various temporary jobs for the period. The few dug-outs in selected communities which were expected to open opportunities for dry season gardening and animal rearing are not only inadequate but also dry out.

In addition to floods, water shortages are affecting the three northern regions. These regions, which have extensive agricultural lands, could have played a key role in the food security of millions of people but rising temperatures have caused severe drought in recent years. Furthermore, low soil fertility, land degradation, and about 70% of the country is prone to erosion especially in the Upper East Region of Ghana which is a threat to agriculture causing bankruptcy, poverty, hunger and food insecurity.

Climate Change Impact in Ghana
In Ghana, there is high variability and unpredictable climate which is being experienced especially in the northern part of the country. There is high temperature, drought, and floods, decreased in livestock and fish population. Also, according to environmental protection agency (EPA), there is: one percent increase in temperature over the 30-year period from the historical records, increased evaporation, decreased and highly variable rainfall pattern and frequent and pronounced drought spells. Another study led by EPA in 2008 on “Ghana climate change impacts, vulnerability and adaptation assessment “ reported that over the past 40years 1960-2000, average annual temperatures have been rising in five of the six agro ecological zones of Ghana. This trend is projected to continue into the future.

Northern Ghana is more vulnerable to the volatile weather pattern caused by climate change than the rest of the country because it is poorer, drier and more heavily dependent on subsistence agriculture and most of the people engage in the activities of charcoal burning, bush burning, sand wining, gravel mining and illegal mining and these activities are at its alarming rate and as a result the is high release of carbon dioxide from this bush burning etc which pose a threat to the ozone layer and this also affect the ecosystem, farming activities or agriculture, human health, forest and game reserves, water sources among others due to the negative role carbon dioxide play in changing water pattern in climatic conditions. The worst outcome of these effects includes torrential rainfall (severe devastating floods), drought, outbreak of epidemics, and influx of pest, famine and rising sea levels and low crop yields.

Negative Effect of Climate Change on Humans as Climate Refugees

On the part of the women who migrate into the cities in search of greener pastures popularly known in Ghana as “Kayayei”(head potters) face the problem of unwanted pregnancies, HIV AIDS, they are subjected to sexual abuse making them single mothers, being robbed and some into prostitution in order to fend for themselves, they are forced to carry luggage that exceed their strength and can be injurious to their health and some even refuse to pay them at all and this “Kayayei” children are poorly raised without any proper education or basic necessities. The society in the long run bears the burden as this children end up as social miscreants. Some of the men end up as armed robbers, drug addicts, sex addicts, murderers and school drop outs.

Reasons for migration as being Climate Refugee

The weather conditions of destinations in southern Ghana make them particularly attractive to young people of the north. The relatively mild weather condition fostered by the two times in the year raining season and the milder dry spell are preferred to the harsh weather condition of the north. Also the existence of plantation/commercial of agricultural means the hiring of farm hands and other higher wages of which they can avail their services. The cocoa and oil palm plantations attract many migrants.

The role of the Government of Ghana

Why industrialized countries have to act now!

There are about 27 million climate refugees worldwide at the moment. However, climate scientists fear that their number will rise up to 200 million in the next ten years. Climate disasters such as droughts will especially affect people in Africa and force them to leave their homes.

However, people who have to leave their homes and countries because of climate change, are not recognized as refugees. Especially the rich industrialized countries who bear a historical responsibility for global warming admit the problem of climate refugees, but are not willing to do anything about it.

The Geneva Convention on Refugees does not cover “climate induced” refugees – not a big surprise since global warming was not an issue at that time. However, politicians use that as an excuse refusing to give climate refugees asylum. But people like Memunatu deserve it.

This shows the injustice of climate change: While the world’s poorest who did not cause climate change are the first to be affected by it, the industrialized countries deny or ignore the existence of climate refugees and isolate themselves.

The German development minister recently admitted the problem of climate refugees, but did not see any necessity to combat the problem. It is time that climate refugees are officially accepted and get the same status as people who have to leave their country because of conflict.

This is an important first step. It is a matter of justice. But in the end industrialized countries have to cut their green house gas emissions to tackle the root of the problem. Only an ambitious and binding climate treaty this year in Paris will sustainably help the people. The world leaders have only 200 days left until the climate conference in Paris, they should act now!.

Twitter: @abubakarifariya
Andreas Sieber, 23, is a German blogger and activist. He has worked for Greenpeace International, Oxfam and German State Government of Saxony. He has been involved in climate activism since 2007. [email protected] Twitter: @sieberandreas