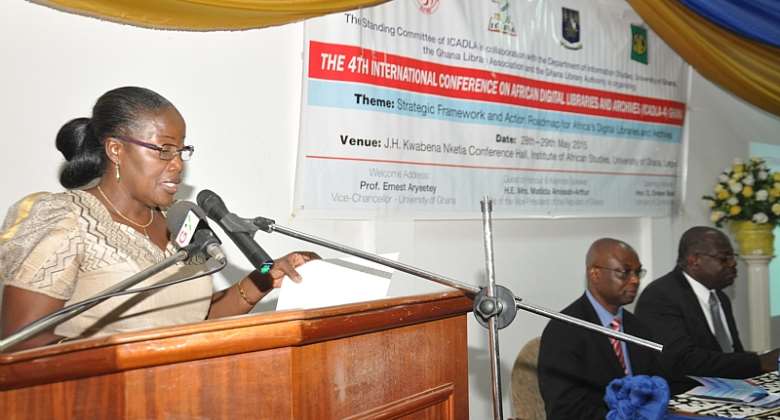 Wife of the Vice President, Mrs. Matilda AmissahArthur, has called for the establishment of a regional network of digital libraries in Africa as a matter of urgency, adding that if we don’t it would be very difficult to move on for the kind of things we want to do to improve Digital Library’s in Africa.

She made the statement on Thursday 28th May 2015 at a major African forum focusing on digital libraries and associated technical, practical, organizational and social issues thus the International conference on African Digital libraries and archives ICADLA-4 which is being hosted by Ghana Library Association, University of Ghana Department of Information Studies and Ghana Library Authority.

Mrs. Matilda Amissah Arthur said the theme of the conference, the focus on: ’Strategic Framework and Action Road Map for Africa’s Digital Libraries and Achieves is appropriate, so the need for them to get a coordinating body that would be responsible for ensuring that the network comes in to help the various libraries that have problems with software issues and advice.

The Second Lady who is also a professional librarian, lamented on the need to do more in the area of digitization, according to her since 2009 there has been three successive conferences on digitization, yet there hasn’t been much improvement, so the need to put in strategies and see how far has library’s and archive’s has gone in the digitization effort.

She recommended that for a start there should be a strategic frame work which would be divided into a sub-regional group then upon improvement they move to the regional level for action to be taken. She said we should also use the conference to come to an agreement on how to establish a strategic frame work more importantly a road map of action for digital libraries and archives in Africa.

Mrs. Amissah Arthur said we should ensure that in the two days program , participants must ensure that each library is on its way to digitization, because each library knows what software that there are and the problems that is associated with it , she also called for a collection policy by collaboration with the relevant agencies to establish the Digital libraries which can be a strategic frame work for the global development of the region and the great information shortfalls in the region can also help to overcome by the establishment of the digital library’s.

The Deputy minister of Communication Hon Felix OfosuKwakye, who represented the Minister of communications thanked the participants for coming together to brain storm on such a program that is being held in Ghana aimed at promoting the interest of the profession which is considered the greatest Innovation of the century.

He said today’s advances in information documentation continue to open opportunities for mankind and if adequately harnessed, will contribute significantly to the accelerated development of our country.

The deputy minister further stated that government has also identified ICT as a key pillar and the enabler for the country’s Socio –Economic transformation and development and the Ghana ICT for Accelerated Development (ICTD4AD) policy has been developed alongside relevant enabling environment for the promotion of ICT as a catalyst for the nation’s development.

Adding that with the emergence of digital libraries and achieves have created new field of information documentation which has revolutionary led the world of information we live in, more also we should know that the world thrives on information .it was in that regard that ,an individual needs to critically access it critically to ascertain the quality and relevance to support a quest .

The cable laid from Ho to Bawku in the Upper East Region covers 800 kilometers and will connect 120 communities to the internet.

The €38 million project is geared towards bridging the digital divide between the urban and rural communities in the country.

"It is going through 20 districts. Now in every district, every public facility is going to be connected to the fibre optic.

"And so for every district, schools hospitals, district assembly offices, police stations,...every public facility in the district is going to be connected to the fibre optic," he indicated. Adding that the project will also support the e-government project which will link all Metropolitan, Municipal and District Assemblies to the seat of government - the Presidency.

All government Agencies is now been connected to the internet via the fibre optic broadband which was funded by DANIDA at a cost of 38 million euros, and was undertaken by Alcatel Lucent international of Denmark, as part of the National IT agency mandated to build a nationwide E Government infrastructure of Ghana

The deputy minister said he was happy to hear that the conference aims to provide a forum for African institutions to examine and review the development of national and international policies in relation to Africa’s special situation;.

The participants were drawn from regional and international policy and development institutions, archives, libraries, museums, government agencies and departments, all levels of educational institutions, funding institutions, and research centers.

E-Levy: Gov’t determined to behave like a vampire to suck th...
47 minutes ago

Gov’t will hide behind IMF discussions to force more hardshi...
47 minutes ago