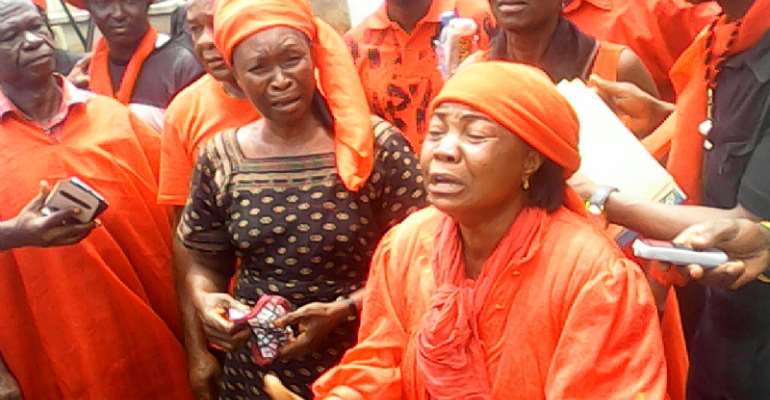 The Kejetia Traders Association (KTA) has again hit the streets of the Kumasi metropolis, demonstrating against the Mayor Hon. Kojo Bonsu, following his intention to reconstruct the Kumasi Bus Terminal into ten thousand stores.

The angry demonstrators are still insisting, asking the KMA to stop such projects. Over the past, the controversy of the reconstruction at kejetia and central market phase one has raised series of concerns in the town.

The traders have staged numerous demonstrations against the mayor, stakeholders meetings as means of getting their grievances to authorities, but to no avail.

The mayor, with his deaf attitude towards their worry has gone ahead and has started registration of store owners and sellers at the bus terminal. Though, he has explained on several occasions to the traders that, they would be relocated, and their stores will be giving back after completion but don’t believe in him.

Today, the traders have again hits on the principal streets of Kumasi, chanting and singing to loud their voices to authorities. The thousand demonstrators included, shop owners, pavement sellers, table stage among others.

The demonstrators have petitioned the new Ashanti Regional Minister, Hon. Peter Anarfi, to quickly intervene in the matter, at the regional coordinating council.

Mr. Yaw Adjei, secretary to the association, speaking said, they believe in the Hon. Minister and asking for his intervention in the matter. They are accusing the mayor of even exhibiting favoritism in the ongoing registration. They presented two petitions to authorities, one the minister and the president.

The director of administration at the RCC Mr. Osei Poku received the petition on behalf of the minister thanks the traders for using right channel to get their grievances heard, and will do everything possible to forward to appropriate authorities for immediate address.