Veep Calls On Chinese Private Sector To Invest In Ghana 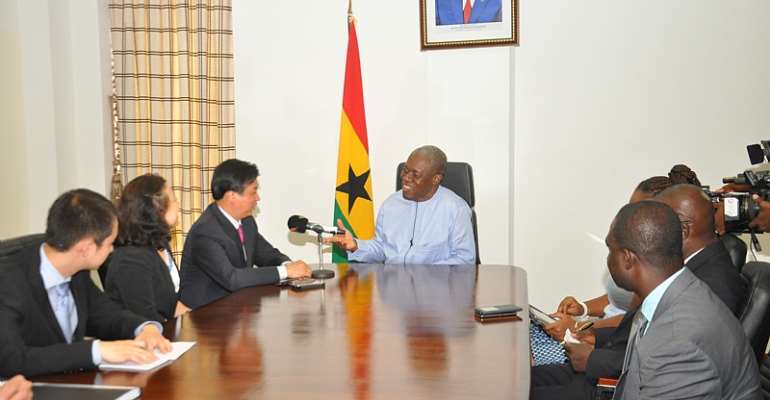 Vice President Kwesi Amissah, has extended Ghana’s gratitude to China for the contribution to social-economic development in the country, adding that there is the need for more Chinese enterprises to come in and invest in the country, especially in the private sector, in order to also contribute to the financial sector investment by opening banks in Ghana and also help to provide credit facilities for traders who trade with them in Ghana.

He made the statement on Wednesday 27th May 2015, when a delegation led by the Special Envoy on Africa China Cooperation Mr. Zhou Yuxiao called on him at the flagstaff House in Accra.

Mr. Kwesi Amissah Arthur said most of the time the Chinese’s are always found in the construction sector and also middlemen trading ,so the need for them to take a critical look at large Chinese companies coming to Ghana to invest ,since there are huge investment opportunities in the country.

He said, Ghana has made great contributions to the liberation movement of Africa and has enjoyed a special status in Africa. Adding that China and Ghana have enjoyed long-term traditional friendship that withstood the tests of time.

Stepping into the new period, China-Ghana cooperation on economy, trade, education, people-to-people exchanges etc. have made fruitful achievements and the China-Ghana friendship is deeply-rooted in the hearts of our two peoples. Currently, the Ghanaian people, under the leadership of H.E. President Mahama, are working towards building "a better Ghana", registering new achievements with which China is delighted.

H.E. Amissah-Arthur said that, the old generation leaders of China and Ghana- Dr. Kwame Nkrumah, Chairman Mao Zedong,Premier Zhou Enlai- have laid a solid foundation for the traditional friendship between the two countries that has lasted for 555 years. In recent years, the development of bilateral relations enjoys good momentum and registers remarkable achievements.

He called for the strengthening of relations between Ghana and china because 55 years of a friendship have so far been very progressive citing the number of investments that they have made in our economy thus supporting the energy sector of the country thus Atuabo gas, road infrastructure. Aviation Agriculture and rail industry

Responding, the Chinese Special Envoy on FOCAC extended warn greetings from the President of the People’s Republic of China and expressed joy and satisfaction at being and feeling at home in Ghana. “

The Special Envoy indicated that he was in Ghana for some purposes: To share notes and views on Ghana-China relations and plans for the future; get opinion on how China could do better with the FOCAC initiative; and to consult and exchange view on international matters with emphasis on the United Nations and officially to inform government of the upcoming summit to be held in South Africa later in the year.

He informed Vice president Kwesi Amissah Arthur that he was very pleased with its bilateral relations with Ghana and acknowledged excellent cooperation on issues of the economy, trade, education, health, security, among others.

Towards this end, the Chinese Special Envoy on FOCAC announced that China was fully ready to undertake and conclude all outstanding projects including that they are doing in Ghana Aviation ,Energy and ICT,

On FOCAC, Ambassador Yuxiao pointed out that it has been around for over fifteen years now and options are being sought on how to make it grow and advance; thus making it better and bigger. He said sincerity, real result, good trade have been key and critical to China’s relations and partnership with Africa and that China wants to benefit from Ghana’s experience and wisdom on many issues.

He pointed out that China will work to align its interventions within the context of FOCAC to the African Union’s 2063 vision because the country’s excess production capacity has to be shipped to Africa, man regional aviation, railway network, agro modernization, among others as areas of importance.

He also called on Ghana to position itself to take advantage of a500 billion dollars fund that had earmarked for overseas development for countries outside China.