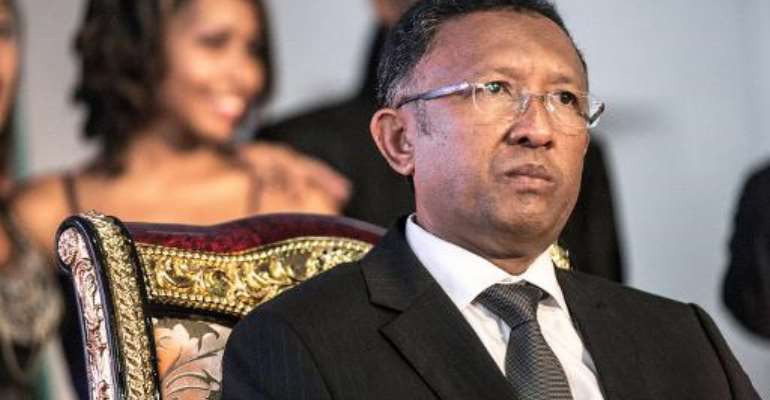 Madagascan President Hery Rajaonarimampianina came to power in 2013 elections, vowing to end years of turmoil after his predecessor Marc Ravalomanana was ousted in a coup in 2009. By Rijasolo (AFP/File)

Antananarivo (AFP) - Madagascan President Hery Rajaonarimampianina on Wednesday challenged the legality of a parliamentary vote to impeach him and said the country needed stability to avoid a return to years of crisis.

Lawmakers voted late Tuesday to dismiss him for alleged constitutional violations and incompetence in a move that threatened to revive political chaos that erupted after a coup in 2009.

Madagascar's constitutional court will now decide whether the impeachment process can go ahead.

"I want to tell the people that I'm still here, your leaders are still working for you," Rajaonarimampianina said in a televised address to the nation.

"Many are asking questions about what happened to the national assembly over the impeachment.

"I am concerned about due process and respect for transparency. There is a suspicion of corruption."

Rajaonarimampianina alleged that although 125 lawmakers had apparently voted, only 80 were present in parliament.

The motion was backed by 121 of the votes -- easily clearing the two-thirds majority required for his dismissal.

The president added ruefully that he had always refused to handed out unwarranted gifts such as 4x4 vehicles to lawmakers.

Rajaonarimampianina, a trained accountant, came to power in 2013 elections, vowing to end turmoil after his predecessor Marc Ravalomanana was ousted in the 2009 coup.

He promised a better life for inhabitants of one of the world's poorest countries, but opposition to his rule has grown in recent months.

His critics say he has failed to deliver on his economic programme and accuse him of stalling on the establishment of a high court and on promised reforms.

Many of his political allies have turned their backs on him.

Andry Rajoelina, who came to power in the 2009 coup and later served as the island's transitional president, helped to get Rajaonarimampianina elected two years ago.

Rajoelina and Ravalomanana have jostled for power for years, but on Tuesday their rival camps joined forces to vote against the president.

Ravalomanana was held under house arrest in the northern town of Antsiranana (also known as Diego Suarez) after returning from exile in South Africa in October 2014.

He was freed by Rajaonarimampianina in May, having apparently recognised the legitimacy of the government.

The parliamentary result was greeted with applause from many lawmakers, but some quickly alleged the vote had been ridden with irregularities.

"There's something wrong, there was cheating," said lawmaker Lydia Raharimalala, who promised to take her claims to the constitutional court.

The US embassy had pledged support for the president and called on parliament to put the stability of the country first, but the plea fell on deaf ears.

National reconciliation was one of the main points of a roadmap brokered by the southern African regional bloc SADC and signed by the feuding parties in 2011 to end political unrest that has long plagued the country.

The 2013 election was designed to resolve the power struggles that brought international isolation and wrecked the Madagascan economy.

The island, a former French colony with a population of 23 million, is famed for its unique wildlife that has evolved due to its geographic isolation.