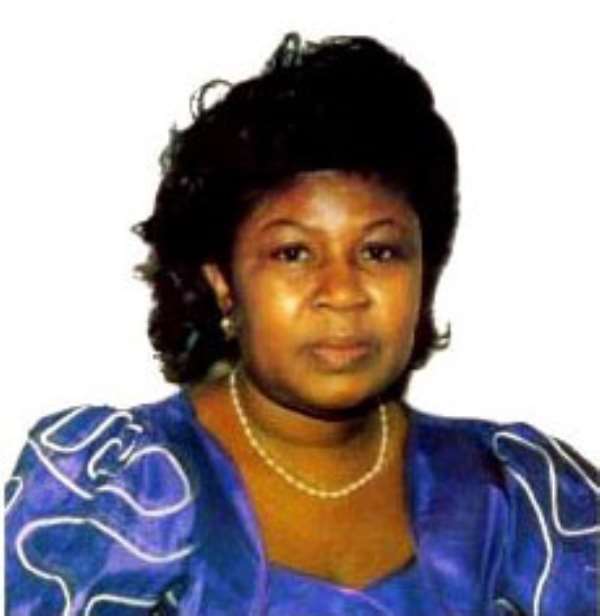 Odumase (B/A), Aug. 28, GNA - Mrs. Theresa Kufuor, First Lady, on Friday began a tour of Brong Ahafo with an inspection of some nursery building projects started last year to promote children's education. Among the places she visited were Techiman, Fiapre and Odumase, where she paid courtesy calls on chiefs and addressed durbars of chiefs and the people. At Odumase, near Sunyani, her hometown, Mrs. Kufuor assured the people that their requests had been carefully considered and would be attended to at the appropriate time. She promised to return to the area with the President before the December elections.
Mr. Kwasi Appiah, NPP Chairman in the area appealed to the First Lady to assist the Odumase Secondary School to acquire a hostel to adequately accommodate the increasing admissions. He also appealed for an extension of electricity supply to surrounding villages to enable the residents to undertake small-scale industrial projects. At Fiapre, the people called for assistance to the Catholic University, a community centre and a library to encourage children to spend more time with their books. Mrs. Kufuor earlier paid a courtesy call on Nana Takyi Ababio, Krontihene of Fiapre and Nana Safo Amankwaa, Adontenhene of Odumase Number One. The chiefs expressed appreciation to Mrs. Kufuor for the visit and for showing concern for them. Nana Kwadwo Seinti, Regional Minister and Mr. Ignatius Baffuor-Awuah, Sunyani Municipal Chief Executive (MCE) accompanied the First Lady.