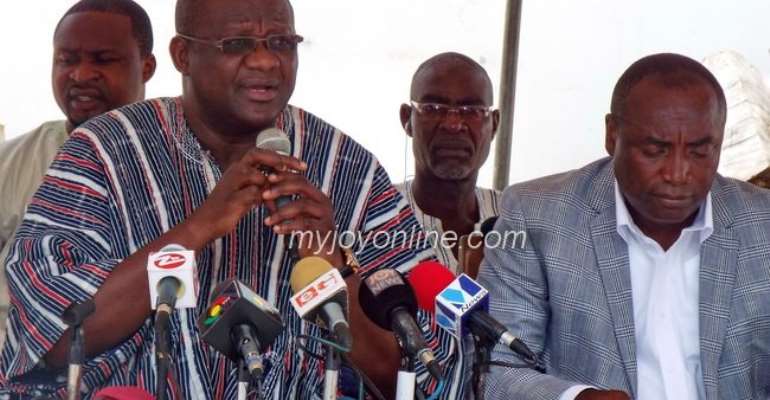 The New Patriotic Party (NPP) Council of Elders have asked embattled Paul Afoko and Kwabena Agyepong, National Chairman and General Secretary respectively of the party to step aside.

However, the Council’s decision must first be endorsed before it can have a binding effect, party’s Director of Communications Nana Akomea has told Joy News.

There have been myriad of calls for Paul Afoko and Kwabena Agyepong's resignation with several regions passing vote of no confidence in their leadership.

Many have accused the two of working against the ultimate interest of the party to win power in the 2016 elections: ironically, it is for this same reason of forming the next government they were elected by party’s delegates last year.

What broke the back of the camel, facilitating calls for their removal from office, is last week’s fatal acid attack on NPP Upper East regional Chairman, Adams Mahama.

The deceased had not been in good terms with the two, a fact Mr. Afoko publicly admits.

Paul Afoko and Kwabena Agyepong have been accused of remotely having a hand in the attack on Adams Mahama by some supporters of the party.

This is being given credence following the try of Gregory Afoko , a brother of the party chair as a key suspect in the callous acid attack.

Gregory is said to have formed a group to protect the duo and their supporters after Mr. Mahama was alleged to have organised thugs to scuttle a meeting by the two about a week before his death.

Meanwhile, Kwabena Agyepong has vehemently rejected calls for his resignation .

"I am a very firm, strong person and resolute. By the Grace of God I believe in what I am doing I know I am right I am going to stick to my position. Those who think i am going to resign better think about that. I am not going to resign. Those who want to impeach me can go ahead. I will make sure they will lose the impeachment effort.

"Good will eventually triumph over evil. The evil forces at play who are trying to destroy it, they can't do it," he insisted in an interview with Joy News.

I wanna sleep in jail for this — says Shatta Wale whiles lea...
27 minutes ago