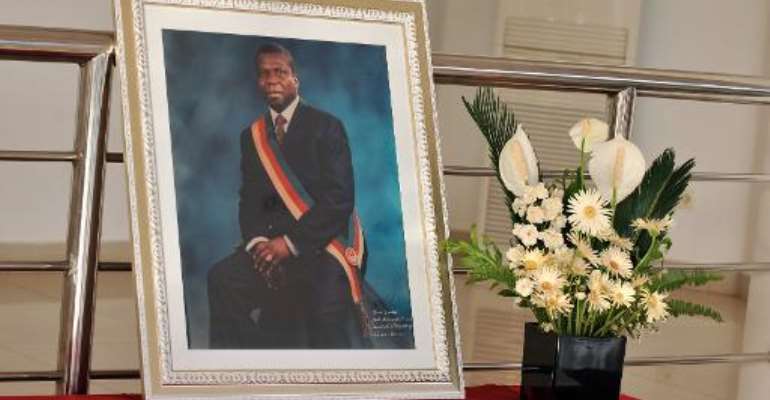 A portrait of slain Guinea-Bissau president Joao Bernardo Vieira stands on a table during his funeral at the National Assembly in Bissau on March 10, 2009. By Seyllou Diallo (AFP/File)

Bissau (AFP) - Guinea-Bissau's parliament passed a unanimous resolution on Tuesday to honour former president Joao Bernardo Vieira as a hero of the country's independence movement, six years after his assassination.

House speaker Cipriano Cassama said Vieira's remains would be transferred from a municipal graveyard to Bissau's prestigious Cemetery of Martyrs, while a statue would be installed in the garden of the National Assembly.

Vieira, widely known as "Nino", fought in his impoverished country's independence war, seized power in a coup and spent his political career in the thick of tensions that frequently jolted the west African nation.

"He deserves consideration and respect and a statue for posterity."

Vieira was the country's "First Commissar", or prime minister, when he led Guinea-Bissau's first coup on November 14, 1980, which brought down Luis Cabral.

He imposed an iron rule with little opening up to the rest of the world, holding multi-party elections in 1994 which the international community judged doubtful.

Coup attempts were made against him in 1987 and 1998, and he was exiled in Portugal for six years before a triumphant homecoming and re-election in 2005.

On the night of March 1, 2009, army chief Batista Tagme Na Waie was killed by a bomb explosion at his headquarters, which also killed four of his bodyguards and injured six soldiers.

A few hours later, Vieira was tortured and murdered with machetes at his home, by soldiers who accused him of ordering the death of Tagme Na Waie.

Guinea-Bissau had by then become notorious as a conduit for Latin American cocaine heading for Europe, and Vieira's relations with the army had steadily deteriorated in the months leading up to his assassination.

The military had for years opposed his burial in the Cemetery of Martyrs, the final resting place of several independence heroes and presidents.

The former Portuguese colony of 1.6 million people turned the page on decades of instability when it elected Jose Mario Vaz a year ago in polls that were judged by the European Union as "free and credible".