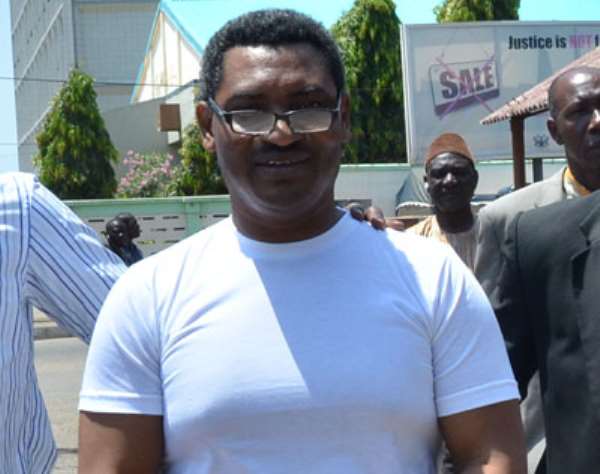 Dr Sulley Ali Gabass
Accra, May 26, GNA - The Defence Counsel in the case involving Dr Sulley Ali Gabass, a medical practitioner, accused of sodomising, a 16-year-old student on Tuesday moved the motion for stay of proceedings pending an application for appeal.

However the State, represented by Assistant State Attorney, Esi Dentaa Yankah, objected to the motion.

The Court presided over by Mrs Rita Agyeman-Budu adjourned the case to May 29 for the ruling on the motion moved by the Defence Counsel.

The case was heard in camera.
At the last sitting the case was adjourned for the Attorney General's Department to pick up the docket from the court registry and file their responses if any after they told the court that the docket sent to the Attorney Generals Department from the Defence Counsel came without the ruling on the submission of no case.

Thus the Attorney Generals Department assumed that the ruling was not ready because it was not attached to the docket,' she stated.

But the Court presided over by Mrs Agyeman-Budu noted that it was not right to assume but to check with the Court Registry.

The accused person had earlier filed a submission of no case but the Court dismissed the assertion, saying it was premature to conclude that Dr Gabass had no case to defend.

The prosecution, presented five witnesses; the first being the victim, followed by Manasseh Azure Awuni, a journalist, Sergeant Francis Odei-Asiedu, Dr Nii Adu-Aryee, and Mr Saajo Asimana, father of the victim, and closed its case.

At an earlier sitting, Deputy Superintendent of Police (DSP) Aidan Dery told the Court that the accused person resides in Takoradi in the Western Region.

DSP Dery said in September last year, the victim became Dr Gabass's friend on Facebook, a social media platform, and they communicated online and on the cell phone.

The prosecution said the victim fell ill and when he informed Dr Gabass, he prescribed paracetamol tablets for him.

He complained to the accused person, who gave him money to go for medical treatment but the victim did not go for the treatment.

The prosecution said when the victim's condition worsened he was sent to the Ahmadiyya Mission Hospital but was referred to the Korle Bu Teaching Hospital.

The prosecution said when the accused person was informed about the victim's plight, he sent GHâ‚µ 800.00 through the victim's elder brother to cater for his hospital expenses.

And with this the victim mentioned Dr Gabass as the one responsible for the ailment.

The prosecution said while on admission, the witness got wind of the matter and interviewed the victim, conducted background checks on the accused person, who was also interviewed.

Following media publications, the police initiated investigations into the matter and the Domestic Violence and Victims Support Unit in Sekondi arrested Dr Gabass.

Perfidious Asiedu Nketiah and Ofosu Ampofo are imposters in ...
35 minutes ago