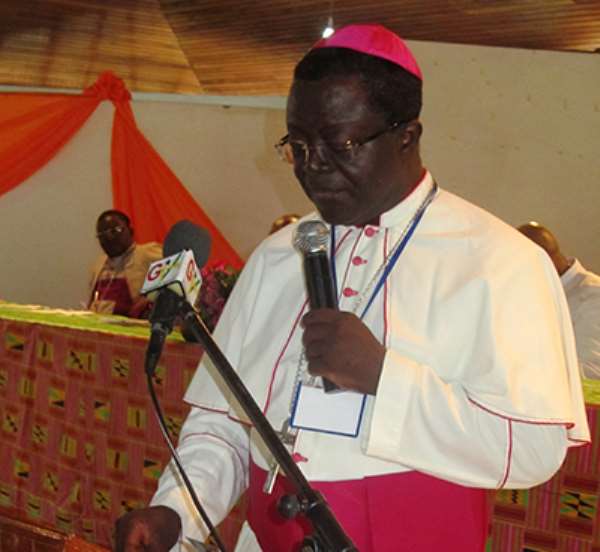 Bishop Osei-Bonsu speaking at the Synod

President of the Catholic Bishops' Conference, Most Rev Joseph Osei-Bonsu, says Christians need to realize that they live in a religiously pluralistic society and so must find ways of dialoguing with believers of other faiths, especially Muslims.

According to him, Christians are required to listen to Muslims about their beliefs to be able to effectively communicate the gospel to them in a way that does not provoke their anger and hatred.

'In Christian-Muslim dialogues, both sides must take great care to respect the principle of religious freedom with its implications, including external and public expressions of that faith,' Bishop Bonsu said at the opening of the Catholic Diocese of Konongo-Mampong's first Synod.

He was speaking on the theme: 'The Catholic Diocese of Konogo-Mampong In Retrospect: Prospects, Challenges And The Way Forward.'

He added, 'We must denounce unfair policies and practices and the lack of reciprocity in matters pertaining to religious freedom.'

The man of God explained that Christian-Muslim dialogue ought to take into account conversion, intimating that it should not be misconstrued to mean a moratorium on conversions between the two bodies.

Bishop Osei-Bonsu, who superintends the Catholic Diocese of Konongo-Mampong, observed that the issue of witchcraft poses a problem to many Christians today.

'Our belief in the triune God is incompatible with belief in witchcraft. Unfortunately, many Christians believe in witchcraft and live in fear of witches and of the evil one,' he noted.

The Reverend Minister said some Christians also import ideas from the Africa Traditional Religion into Christianity by resorting to the invocation of curses as a means of redress for offences against them.

'How do we combat these beliefs in the diocese?' he asked and added that 'The Synod will have to deliberate on these issues.'

In the view of the Catholic Bishop, the church needs to be concerned about the environment within which the faithful live and proclaim the gospel.