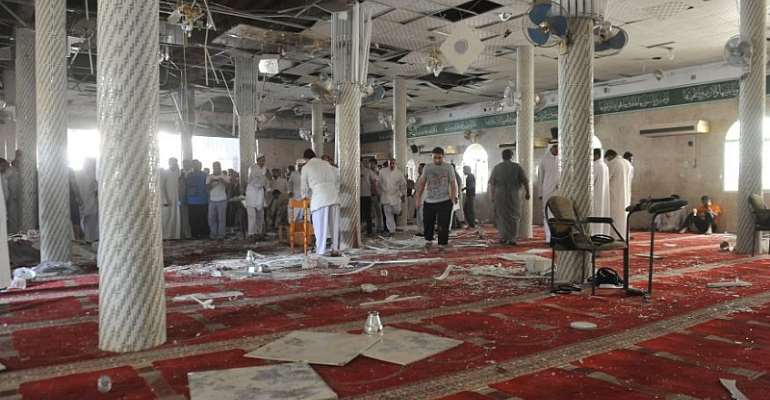 Bomb attacks were carried out against a Shiite mosque in oil-rich eastern Saudi Arabia on May 22, killing at least 21 people. Another Shiite mosque was also bombed inside the capital of Yemen, Sanaa, representing an escalation of the war over control of the underdeveloped Middle Eastern state.

The attacks, which came on a Shiite holy day, were claimed by the Islamic State group. The attack at the Imam Ali mosque in Saudi Arabia’s Shiite-dominated Eastern Province occurred during the Friday prayers.

These attacks are taking place within the context of heightening tensions within Yemen and Saudi Arabia. Since March 26, Riyadh and the Gulf Cooperation Council (GCC) have led a coalition of other regional states in a massive campaign of aerial strikes targeting civilian and infrastructural targets within Yemen.

The Ansurrallah movement, better known as the Houthis, has been fighting the Saudi-GCC sponsored former President Abdrabbuh Mansour Hadi who has taken refuge in the Riyadh. Reports indicate that thousands of people have been killed, wounded and displaced in the fighting.

Pentagon air force units have been providing intelligence and refueling resources to the Saudi-GCC war planes. Despite the call for a truce and humanitarian relief, the Saudi-GCC command structure and its allies have attacked airports, internally displaced-persons camps, residential districts and shipping ports with the intent to block aid from getting to the Yemeni people.

Meanwhile, 14 people were reportedly killed in ongoing airstrikes carried out by Saudi Arabia in two provinces of Yemen on May 23. The Saudi warplanes' bombed the Hamoud al-Fatimi district in the southeastern Yemeni province of Dhamar on May 21 claiming the lives of eight members of a family, including five women, two children and a man, according to reports released by Yemeni media.

Ansurallah positions in the capital of Sanaa and in the southern port city of Aden as well as Marib province in the east were all targeted in sustained airstrikes on May 22. In the northern districts of Sanaa, Saudi-GCC coalition warplanes struck a stadium and a base of the Republican Guards loyal to former President Ali Abdullah Saleh, who is in alliance with the Houthis.

Overall on May 22, eight Saudi-GCC identified Ansurallah and allied bases were hit in and around Sanaa, including the Dalaimi air base located close to the international airport.

On May 25 there were fierce clashes reported in southern Yemen, where dozens have been killed. Fighting in Dhalea, pitted militias supported by the exiled government of ousted President Abdrabbuh Mansour Hadi, who said they had retaken positions occupied by the Ansurallah.

Nonetheless, in Taiz, Yemen’s third largest city, the Ansurallah fighters have regained areas occupied by the Saudi-GCC allied forces. Yemeni officials told the international media that at least 30 members of Ansurallah, their allies and five fighters from the pro-Hadi fighters, were killed over the weekend.

Medical personnel and local residents told media outlets that at least 10 non-combatants were also killed in the fighting.

In a fierce continuation of the air war, areas held by the Ansurallah were bombarded during the evening of May 24-25.

According to the BCC World Service, “Later, heavy fighting was reported at the rebel-held base of the 33rd Armored Brigade, the AFP news agency said. Reuters reported that 10 soldiers from army units allied to the (Houthis) had been killed in the fighting, along with three militiamen, while Al-Jazeera TV cited unnamed sources as saying that dozens of people had been killed and wounded.” (May 25)

On May 24, it was reported that the national air defense forces dropped a Saudi warplane in Saada province in northern Yemen. (TV Al-Massira)

An Al-Manar TV correspondent reported that the fighter jet has been shot down in the area of Malil in Kattaf district. (May 24)

In taking the war across the Saudi border, Yemeni armed forces and volunteers of the Popular Committees overran a strategic military base in Saudi Arabia in response to its continued U.S.-backed military aggression against Yemen. On May 22, Yemeni soldiers and Popular Committees fighters seized the al-Me’zab base in southwestern Saudi Arabia near the border with Yemen, the Arabic-language al-Masirah satellite television network announced.

The Saudi forces in the base fled the site. Additional reports on May 25 claimed that the “Yemeni army, backed by popular committee forces, had destroyed four Saudi tanks after storming a base in Saudi Arabia’s southwestern city of Jizan.” (Press TV)

Earlier, Yemeni officials said UN-sponsored peace talks that were due to start in Geneva later this week had been postponed indefinitely.

United Nations officials are attempting to mediate what they describe as an "inclusive, negotiated political settlement" to the war in Yemen, which has resulted in reports claiming anywhere between 2,000-4,000 deaths and the wounding of 7,000 others since March 26.

Nonetheless, these efforts experienced yet another failed attempt when Yemeni politicians indicated they had been notified by the parties involved in the war that the Geneva peace talks would not begin on May 28 as planned.

"The Geneva meeting has been indefinitely postponed because the Houthis did not indicate their commitment to implement the UN Security Council resolution [passed on April 14]," Sultan al-Atwani, an assistant to Saudi –allied President Hadi, told the press. "Also, what is happening on the ground... makes it difficult to go to Geneva," he added.

The resolution passed by the Security Council called upon the Ansurallah to lay down their arms and to relinquish all areas they have seized in the months of fighting. The resolution also demanded that they start up talks on the failed political agreement negotiated by the U.S. beginning in 2011 when the former president, Ali Abdullah Saleh, was forced to hand over power following mass demonstrations and rebellions. The Ansurallah movement is not opposed to participating in talks but will not abide by the UN Security Council resolution which they feel would only benefit the Saudis and their allies inside Yemen.

Deputy Foreign Minister for African and Middle Eastern Affairs Hossein Amir Abdollahian of the Islamic Republic of Iran joined by his Russian counterpart held discussions on a number of issues, specifically related to ending the Saudi-GCC war on Yemen. The talks held in the Russian capital of Moscow on May 25, between Amir Abdollahian and Mikhail Bogdanov, Russia's deputy foreign minister, probed possible ways to halt the current fighting in Yemen. (Tasnimnews.com, May 25)

In a statement to news outlets prior to the meeting, the Iranian envoy criticized the United Nations for its ineffective action on the Yemeni situation and stressed that the world body must embark upon a more rigorous stance on ending the Saudi aggression. Abdollahian continued by warning that an accelerated level of tensions in Yemen cannot bring about a political settlement.

Aid Shipments Politicized by Saudi-GCC Coalition
The Agence France Press (AFP) reported on May 24 that “A boat carrying 460 tons of Emirati relief aid docked Sunday in Yemen's restive port city of Aden, as Saudi-led air raids against Shiite rebels continued across the country. The shipment, including medical and food supplies, is the second from the United Arab Emirates, which delivered last week 1,200 tons of relief aid, said local aid coordinator Ali al-Bikri. Another ship carrying 400 tons of diesel also arrived Friday, said Bikri, who was appointed by Yemen's government-in-exile.”

Nonetheless, an aid shipment from the Iranian Red Crescent Society known as the Nejat (Rescue) is reportedly not being allowed to proceed to Yemen to deliver the assistance including food, blankets and medical supplies. The Iranian vessel which has western-based peace activists and journalists on deck is being required to leave the aid at the Horn of Africa port of Djibouti.

Another report from the Iranian Revolutionary News Agency (IRNA) noted that an aircraft filled with assistance for the Yemeni people was not even allowed to land at Djibouti “despite coordination with the United Nations and the World Food Program, the plane was not granted permission to land in Djibouti." (May 25)

The article continues saying “the plane is now in south-eastern Iran awaiting authorization of the foreign affairs ministry of Djibouti to land. Djibouti is the site of a key U.S. military base, the only permanent U.S. base in Africa. Drone missions are launched from the base as well as other flights.”

Finally an Iranian Red Crescent relief vessel, the Nejat, docked at the Horn of Africa port at Djibouti. The ship was slated to undergo an United Nations inspection before attempting to land at Hudaydah port in Yemen.

Over 1 Million Students Have Benefitted From Free SHS — Bawu...
1 hour ago

47% Of Ghanaians Believe Ghana Is Moving In Right Direction ...
1 hour ago