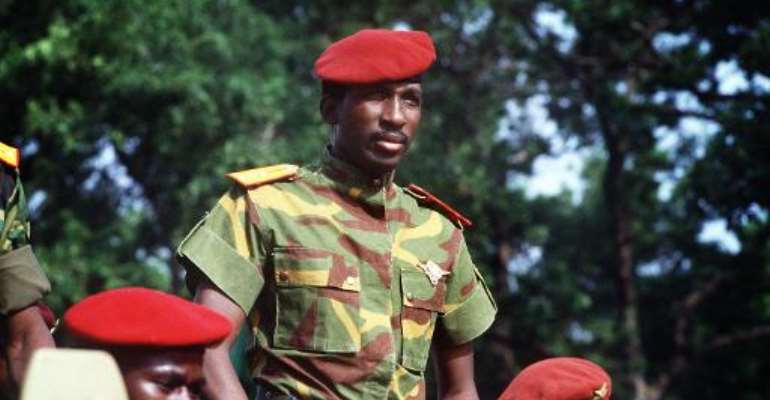 Ouagadougou (AFP) - The remains of Burkina Faso's slain former president Thomas Sankara and 12 of his colleagues who were assassinated during a coup d'etat in 1987 began to be exhumed on Monday.

Sankara was a popular Marxist army captain who came to power in a 1983 coup and transformed what was then the former French colony of Upper Volta into Burkina Faso.

He was hastily buried on the night of October 15, 1987, just after a coup d'etat brought to power Blaise Compaore, who ruled the country until a major popular uprising in late 2014 led to his removal.

Throughout his years in power, Compaore refused to investigate Sankara's murder, but in March, Burkina Faso authorities ordered the corpse to be exhumed so it could be formally identified.

Sankara's remains were said to be buried in a cemetery in the Dagnoen district of Ouagadougou, although his family and supporters doubt if his body is actually there.

An AFP reporter at the gates saw the exhumation begin on Monday, while relatives inside said that young people equipped with picks and shovels started opening two tombs.

"They are digging up the tombs, it might take a long time," said Mariam Gouem, the daughter of one of Sankara's slain bodyguards.

"It is difficult for us. I am inside (the cemetery) with my little sister. When dad died, she was six months old," said the daughter of Der Somda, another of Sankara's colleagues.

Three doctors -- two from Burkina Faso and one from France -- are in charge of digging up the bodies. A government official and an investigative judge are present at the site.

With police blocking off access to the cemetery, dozens of people nearby chanted: "We want the truth!"

Lawyer Benewende Stanislas Sankara, who is not related to the former head of state, represented the family at the graveyard.

Dubbed Africa's "Che Guevara" by admirers, Sankara's reputation spread far beyond Burkina's landlocked borders because of his determined anti-imperialist outlook and a raft of measures to end dependency on foreign aid.