The Church must hold those who govern us accountable - Prof Adei 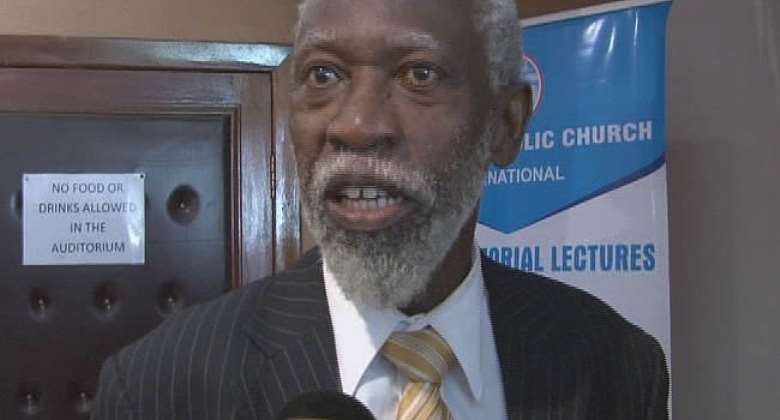 A former Rector of the Ghana Institute of Management and Public Administration (GIMPA), Professor Stephen Adei, says church leaders must play an active role in holding the country’s political leaders accountable to the people.

He said suggestions that religious leaders must stay away from the political space are misplaced and must be rejected.

“The Church itself must tell its members to excuse certain practices and must hold those who govern us accountable for good governance,” he said.

He was delivering a lecture on the Impact of Christianity in Ghana's development.

Some religious leaders have been accused of branching from their core duties of pasturing into politics and making political statement.

Some members of the governing National Democratic Congress (NDC) have had cause to complain bitterly some specific religious whom they say have a knack to criticize government harshly.

They contend that the religious and civil society groups are active only when the NDC is in power.

But Prof. Adei said, “nobody should allow any politician to say, ‘separate the Church from governance.’ The church members, where do they live? Do they live in heaven? They live on earth and contribute their taxes.”

Any politician who advocates a strict separation between the church and governance has business leading the country, he asserted.

Christians, he said, should not shy away from running for political office.

“The time has come where the Christians must be able to say of people who are standing to be presidents, ‘we have confidence in this A and B to be a Christian leaders and therefore our people should vote for them’ and let them abuse you, you have been prophetic but don’t say if I'm an Akan I will vote for an Akan and if I’m an Ewe I will vote for an Ewe-founded party,” he stated.

The former GIMPA Rector said the de-Christianization of mission schools has to a large extent contributed to ‘the rot’ in the political cycles.

Speaking at the Anim memorial lecture, the executive chairman of Ghana Christian international high school said the time has come for Christians across the country to push for and reclaim their institutions from the state.

He said t hat is the surest way to instill sanity and stamp out corrupt leaders from the political space.