Seed of Peace Grows in the Hearts of Religious Leaders and Youths in London: The Second Dialogue of Scriptures hosted by HWPL 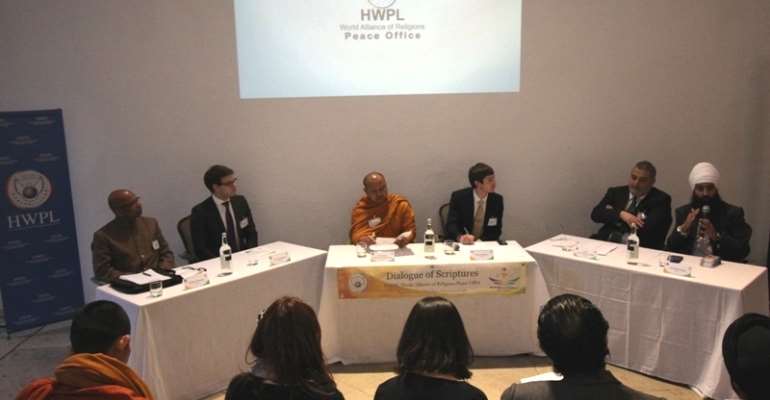 London, United Kingdom - The work of peace continues in London, United Kingdom. Heavenly Culture, World Peace, Restoration of Light (HWPL, Chairman Man Hee Lee) held their second Dialogue of Scriptures through the World Alliance of Religions’ Peace (WARP) Office at St. Ethelburga's Centre for Reconciliation and Peace on Wednesday May 20th 2015. Dozens of young adults attended to hear distinguished representatives from various religious faiths speak about the concept of peace based on their scriptures. The representatives included a Muslim leader and Officer of the Order of the British Empire (OBE), Syed Yousif Al-Khoei, a Buddhist monk Phramaha Bhatsakorn Piyobhaso, a Hindu priest Acharya Sonerao, a Sikh educationalist Jagraj Singh, and a Christian scholar Justin Brand.

Recently there has been a great concern in the UK that a growing number of people are leaving to join extremist organisations and fight in civil wars in places such as Syria and Iraq; it has become apparent that there is a great misunderstanding of the purpose of religion and misconceptions about the teachings within the scriptures.

Held with a clear purpose to educate and restore the lost message of peace with a hope of uniting religions under God, the Creator, the Dialogue of Scriptures became a platform to discuss each scripture in a fair and peaceful way. Under the theme of "Faith in the Hope of Love?" each of the leaders and representatives from various religions brought their own religious scriptures and answered questions by quoting from the content of their scriptures. By comparing and contrasting each text, the audience learned about the different concepts of peace within the scriptures and which text has the most reliable answer to establish peace in the world. Furthermore the audience was able to witness harmony formed among different religions.

Phramaha Bhatsakorn Piyobhaso's commented, “We can work together successfully and my hope is that all religions can be used to bring us together to unify the people." The message echoed in the hearts of the religious leaders in the UK to work together in the name of peace as they continue to spread a positive message within their communities.

In the evening, the participants watched the highlights of the successful Africa World Alliance of Religions’ Peace (WARP) Summit, hosted by HWPL and its affiliates International Women’s Peace Group (IWPG, Chairwoman Nam Hee Kim) and International Peace Youth Group (IPYG, Director Du Hyun Kim), on 30-31 March 2015 at the University of South Africa, Pretoria. The summit called for the unity and action to ensure interfaith harmony and the lasting legacy of peace for the future generations. The Africa WARP Summit and the Dialogue of Scriptures are a continuation of the success of the WARP Summit held in South Korea on 17-19 September 2014. At the summit last year, two noteworthy agreements were signed by more than 2,000 global leaders at one sitting: “The Agreement to propose the Enactment of an International Law for the Cessation of War” and “The Agreement for the Alliance of Religions” to bring about inter-faith harmony.

With a definitive answer to why there are constant conflicts and wars that threaten peace, why we need a world without war, and how we can create a world of peace, the Chairpersons of HWPL and its affiliates are actively working to make world peace a reality by facilitating inter-religious dialogues, and gathering governmental and judiciary officials to enact an international law for the cessation of all wars.

In the mean time, for the first time in history, Chairman Lee of HWPL announced the Declaration of World Peace on May 25th 2013 in Seoul, Korea in front of 30,000 youths from all over the world. Since then, the IPYG Peace Walk Festivals have taken place to celebrate the annual commemoration. Well-known cities like Carson City California, Mindanao Philippines and Royal Bafokeng Nation in Republic of South Africa have designated May 25th as ‘HWPL Day’ as a day of world peace. This year marks the 2nd Annual Commemoration of the Declaration of World Peace and IPYG Walk Festival which will be hosted by HWPL branches in over 50 cities from 30 countries including New York, San Francisco, and Berlin.

4 OVER 30, 000 PARTICIPANTS IN THE PEACE WALK FOR THE 1ST ANNUAL COMMEMORATION AT PEACE GATE IN SEOUL, KOREA