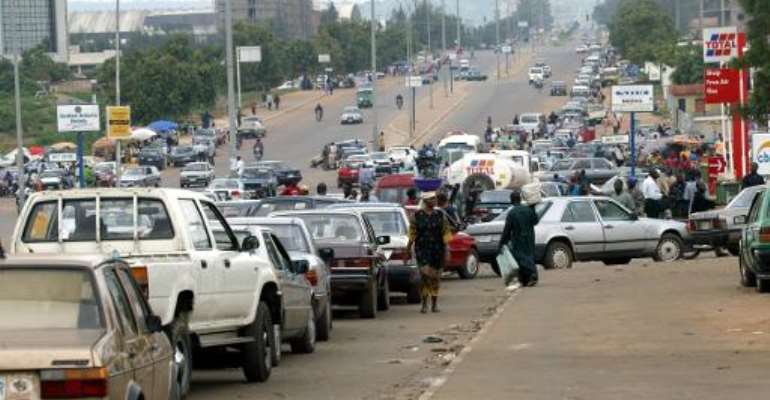 LAGOS (AFP) - Nigeria's biggest mobile phone operator MTN has warned that its network faces shutdown due to fuel shortages that have crippled the nation.

The company, the biggest subsidiary of the South Africa-based MTN Group, said it needed a "significant quantity of diesel in the very near future to prevent a shutdown of services across Nigeria".

"If diesel supplies are not received within the next 24 hours the network will be seriously degraded and customers will feel the impact," it added on its Twitter account @MTNNG on Saturday evening.

Nigeria -- Africa's biggest economy and most populous nation -- has been increasingly hit by fuel shortages in recent weeks because of a long-running row over controversial subsidy payments.

Despite being Africa's biggest oil producer, Nigeria lacks domestic refineries, forcing crude to be exported and products such as petrol and diesel to be imported.

To keep costs to consumers low, the government sets prices below the market rate and pays the difference to importers.

But the global slump in oil prices has hit Nigeria hard and oil marketers claim they have not been paid in full.

Fuel depots have closed as a result pending payment of the arrears, with the situation worsened after oil and gas union workers walked out over the sale of two oil blocks.

Many petrol stations have now run out of fuel both for vehicles and generators, on which most people and businesses rely because of the woeful public electricity supply.

On Friday, the Ministry of Power said electricity production was at an all-time low of 1,327 megawatts, according to local media reports.

Diesel generators power most of MTN's base stations and switches across the country but supplies were running low, said the company's corporate services executive Akinwale Goodluck.

The Lagos Chamber of Commerce and Industry earlier this week warned the crisis could force firms to lay off staff.

The warning from MTN, which has more than 55 million subscribers, is a sign that businesses were now being hit.

Some domestic flights have been cancelled while international airlines have re-routed services into and out of Nigeria to pick up aviation fuel.

Virgin Atlantic flights from Lagos to London Heathrow have diverted to Ghana's capital Accra and Majorca off southern Spain, while Air France services from Paris have stopped in Dakar, passengers said.

At least three Nigerian radio stations announced on Twitter they would be going off the air to ration fuel that powers its generators.

Be strong — Isaac Adongo consoles Bawumia with a cow for mot...
50 minutes ago