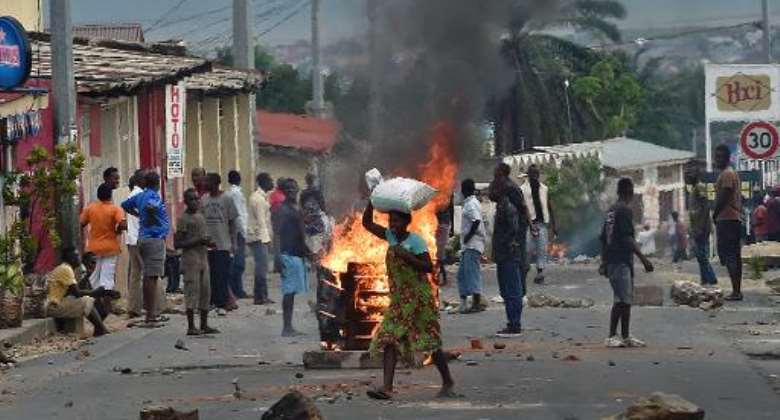 A woman walks past a burning barricade in the Kinanira neighborhood of Burundi's capital Bujumbura on May 21, 2015. By Carl De Souza (AFP)

Bujumbura (Burundi) (AFP) - Thousands of anti-government protesters in Burundi marched on the streets of the capital Bujumbura Friday, defying one of the heaviest pushes by police to end weeks of demonstrations.

At least two protesters were shot dead and eight wounded in clashes on Thursday with police, the Red Cross said, the latest victims of the unrest, triggered by President Pierre Nkurunziza's bid for a third term, in which more than 20 people have died.

"This is the first time such an incident happens, we will take appropriate measures to ensure this does not happen again," Ntahorwmiye said, adding that two soldiers fired into the air to stop the crowd, but "all the equipment was burned."

The crisis, which began in late April after the ruling party nominated Nkurunziza to stand again in the June 26 presidential election, deepened last week when a top general staged a failed coup attempt.

Parliamentary polls, initially set for May 26, have been postponed to June 5.

On Friday morning, protesters in the city's Cibitoke district shouted and blew whistles to try to encourage others to come out onto the streets. By late afternoon, thousands had answered the call.

"We try to bring people together, then we will go to neighbouring districts," said one protester.

An AFP journalist was denied entry by the police into Musaga, a flashpoint district that has seen some of the worst violence.

"It's for your safety," a policeman said, claiming to have been ordered to block journalists' access to the area.

"There are a lot of police on the streets to terrorise us," said Steve, a protester.

Nkurunziza said in an address to the nation late Wednesday that most of the central African country was secure and that the upcoming parliamentary and presidential votes would be peaceful.

Opposition and rights groups say that Nkurunziza's bid for a third five-year term violates the constitution and the terms of a peace deal that ended a 13-year civil war in 2006.

Nkurunziza, a former rebel leader and born-again Christian who believes he has divine backing to lead the country, argues that his first term did not count as he was elected by parliament, not directly by the people.

Four key private radio stations were attacked and closed during the coup bid after broadcasting messages from coup leaders, and there is now virtually no independent media in the country, with government broadcasts relaying presidential messages.

Innocent Muhozi, who heads Renaissance television and radio, one of the stations attacked, was questioned in court Friday over broadcasts, but was not charged.

More than 110,000 people have fled the violence to neighbouring countries, according to the United Nations, with the UN refugee agency warning Friday that the number could double within the next six months.

Cholera has broken out in squalid refugee camps in Tanzania, with at least 31 people having died and over 3,000 cases in total with numbers growing by up to 400 cases a day.

Nkurunziza has urged the refugees to "come back home", assuring them they face no security threat.