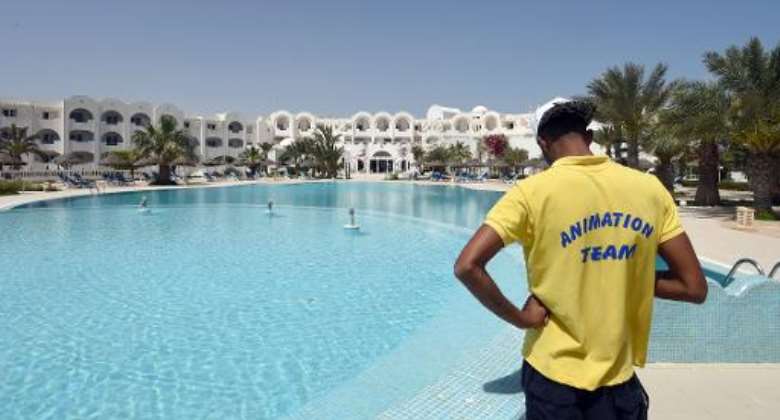 It's another sun-drenched day but the deckchairs of a four-star hotel on the island of Djerba stand empty, in a sign of the "catastrophic" summer on the horizon for Tunisian tourism. By Fethi Belaid (AFP)

Djerba (Tunisia) (AFP) - It's another sun-drenched day but the deckchairs of a four-star hotel on the island of Djerba stand empty, in a sign of the "catastrophic" summer on the horizon for Tunisian tourism.

"It's dead. It's all over for this year," was the blunt verdict from Adel Tarres, manager of the hotel on the holiday island off the south coast of Tunisia that has in past years been a magnet for tourists from Italy across the Mediterranean.

He had been counting on a "perfect" season and recruited an extra 25 staff to cater to tourists he hoped would be lured by the island's sandy beaches and whitewashed traditional houses.

But that was before jihadist gunmen attacked the Bardo national museum in Tunis on March 18 and mowed down 21 foreign tourists and a policeman.

Immediately, the Italian tour operator who had block-booked the 170-room hotel from May 1 right through to the end of October cancelled the reservation -- a loss estimated at 1.4 million euros ($1.6 million).

The tourism sector, which accounts for seven percent of Tunisia's GDP and almost 400,000 direct and indirect jobs, had already been rattled by political instability and rising Islamist violence since the 2011 revolution.

In Djerba alone, around 30 establishments have closed down over the past four years, Farhat Ben Tanfous, secretary general of the region's hotels federation, told AFP.

After the Bardo museum massacre, the outlook for the summer season, which represents 60 to 70 percent of annual revenues, looks "bad", said Jalel Henchiri, who is president of the federation.

For Ben Tanfous, the best scenario would be a five-percent decline in revenues compared with 2014, which was also worse than expected.

"That would at least give us some hope for (following) years. I don't think we should talk about this year or 2016 but rather look at a strategy to turn the corner," he said.

Even before the Bardo attack, tourism figures made grim reading, with revenues 6.8 percent lower in the first quarter, compared with the first three months of 2014, and overnight stays down 10.7 percent.

Ben Tarfous said efforts had been made to deal with the problem of rubbish left piling up on Djerba's streets last year because of the lack of a treatment plant.

And security has also been stepped up for the summer season as government officials repeatedly insist that Tunisia is safe for visitors.

But traders in Djerba's souks say the prospects are still bleak.

"The few tourists in Djerba are scared after what happened at the Bardo and prefer not to leave their hotels," sighed Yassine Ben Othmane, a leather artisan.

"Ever since 2011, each year has been worse than the one before, but this year is the worst."

Australian tourist Renata Payer said she wasn't exactly scared but had taken precautions such as not renting a car or going out alone.

Tunisian authorities have launched a campaign, especially on social media, to convince tourists not to miss out on the historic and cultural riches that the country has to offer.

But insiders say they are fighting against the tide, this year at least.

"If it goes on like this, I'll be forced to change profession. You can't make a living in tourism any more," said Ibrahim Zagdid, who sells traditional North African costumes.

Court issues warrant for arrest of Xavier Sosu for 'disrespe...
20 minutes ago