The NPP Is Doing Better Outside Ghana Than Within Ghana 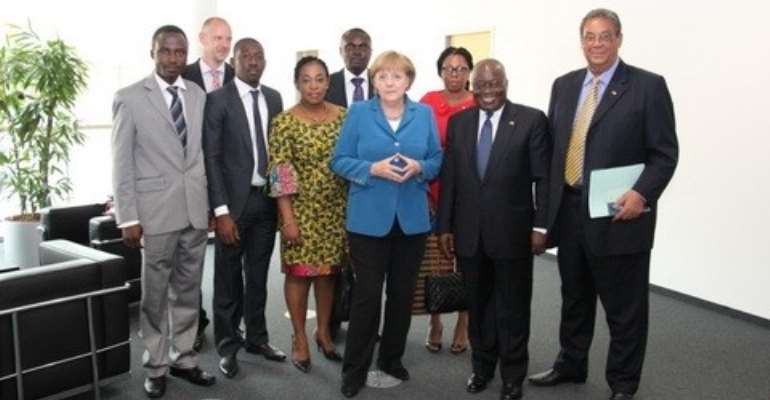 Folks, I will stick my neck out again to comment on happenings in the NPP, damn the personal attacks that its buffs will unleash on me as usual. After all, what haven't I seen or felt before from them anytime I take them on? Phew!!!

We have had enough from the NPP camp to conclude that it is better at projecting its angelic face outside Ghana than it does at home. Charity seems not to be beginning at home for it, given the on-going head-butting and nasty incidents here and there to threaten its ranks and once again portray its flagbearer, Akufo-Addo, as not a unifier.

While his party burns at home and face-saving rhetorical manouevres are enacted by the main actors (whether those in the Akyem faction or the Asante cabal---forget about the Dombo appendage, which is nothing but an afterthought to massage the feelings of our compatriots of Northern Ghana extraction who have been unwittingly exploited for political leverage by the "Kabonga"), Akufo-Addo is on a grand tour of European countries to create the mistaken impression that all is set for him to become Ghana's President at the end of Election 2016.

The NPP National Chairman, Paul Afoko, has already expressed optimism to put him in power while Akufo-Addo himself has asked for unity to help him accomplish his childhood ambition of becoming Ghana's President "at all costs", propelled by "Yen Akanfuo", all-die-being-die!!

Yet, the still waters are running deep within the party. No matter how much plastering is being done, the truth remains that all is not well and the NPP's public posturing and persistent calumniating of the Mahama-led administration won't necessarily translate into political capital. That is why I consider the huge international fanfare surrounding Akufo-Addo's showing as laughable.

Just as he did before the 2008 general elections, he is out, projecting himself to the world to create the impression that he is at the cusp of setting foot on the land of milk and honey. Until he hastens slowly, he will be caught pants down again.

Now, to my main beef. The agenda being pursued by Akufo-Addo on this tour of five European countries is really huge. As reported, he has already met the German Chancellor, Angela Merkel, and is billed to visit other countries ( The Netherlands, Belgium, France and Italy).

In Germany, we are told that he also met with the CDU's Volkmar Klein to share ideas at an event in Berlin organised by the Konrad Adenauer Stiftung, the development foundation associated with the German governing CDU party, a sister party of the NPP. (The CDU as "a sister party" of the NPP? Interesting!!).

But that is not all. We are told that in The Netherlands, he will pay a working visit to the Regional Education Centre in Amsterdam, where he will see at first hand the operations of the Dutch technical and vocational school system, and also address NPP townhall meetings.

In Belgium, he will deliver the commencement address at the graduation ceremony of the prestigious Centre Européen de Recherches Internationales et Stratégiques (CERIS) on “Ghana: Present Challenges and Future prospects”.

In France, he will pay a site visit to KUHN group, one of the world's leading suppliers of specialised agricultural machinery, meet Ghanaian students and executives of NPP, before departing to his final destination of the tour, Italy, where he will take part in Parma, from May 28 to May 31, in the NPP's quadrennial International Conference, which brings together all NPP overseas branches to deliberate on the future of the Party.

A grand and tall agenda for Akufo-Addo, which is enviable by all standards for an opposition party flagbearer seeking ways to make himself relevant.

Truth be told, this tour is commendable, especially if one reads deeper meaning into its public relations benefits and political expediency (to hob-nob with the NPP followers not resident in Ghana but who will do all they can to either be in Ghana at the time of the elections or use their connections to influence voters at home to do their bidding).

Of course, ROPAAL hasn't been ratified for Ghanaians resident outside the country to vote; so, why concentrate on Ghanaians living in other countries and not those residing in Ghana with the power to vote? I see a round-about kind of politicking going on here.

And the NPP has numerous international branches all over the world, far more than any other political party in Ghana. It has had these branches since its metamorphosis from the Danquah-Busia Club to the NPP in 1992. And these branches make a lot of noise in the media to create the impression that the NPP is formidable and the only party to "save" Ghana. Much ado about nothing, if the outcome of Elections 2008 and 2012 is anything to go by. What will they do to change the dynamics at Election 2016?

Building international networks for the party is good but it won't put the party in power. The NPP remains unattractive to a large extent because of what it is, built on elitism and ethnic or sectional politics, which is why it can't have a huge national swathe. Let its buffs prove me wrong here!!

For the flagbearer of an opposition party to go to this length is eye-popping; but the reality is that such visits usually don't translate into anything politically beneficially, especially if things fall apart for the party at home and its centre cannot hold.

Akufo-Addo is known for making statements touching on party unity only when outside the country (as he has done on this visit) while doing nothing practically necessary to patch differences at home. Why is he like that?

For the records, many explosive utterances have been made by leading members of the NPP to damage the party's interests, which he either openly supported (as was the case of Kennedy Agyapong and Osafo-Marfo's ethnocentric inanities) or kept mum over to reinforce negative impressions about him as a divider and not a unifier. Yet, he is quick to talk about (party) unity whenever outside the country. Is he really serious?

When Paul Afoko and Kwabena Agyapong were under siege in the Upper East Region recently, Akufo-Addo was in Ghana but kept mute. While his house burns at home, he remains nonchalant; but given the chance to fly out of the country, he has found his tongue to comment on burning issues in his own party. Why will he do so outside and not inside the country where his voice could make the difference better? Is this man really serious?

In any case, I hope that he will see the need to do more at home to grow his party than bluffing on foreign trips as if he is already ensconced at the Presidency. Between the alleys of Mount Sinai and the land of milk and honey is a long, tortuous distance that only the well-equipped traveller can traverse. No Moses is ever destined to taste of that milk and honey.

Building the party at home for it to appeal to voters (and for it to be voted up) matters more than puffing oneself up to attempt rubbing shoulders with those already up the pedestal of political pomp and pageantry in other countries!! Surely, pride will precede the fall that dooms ambitious politicians of Akufo-Addo's type. My take, and I have no regrets for it.

Withholding salaries of workers without Ghana Card illegal –...
6 minutes ago