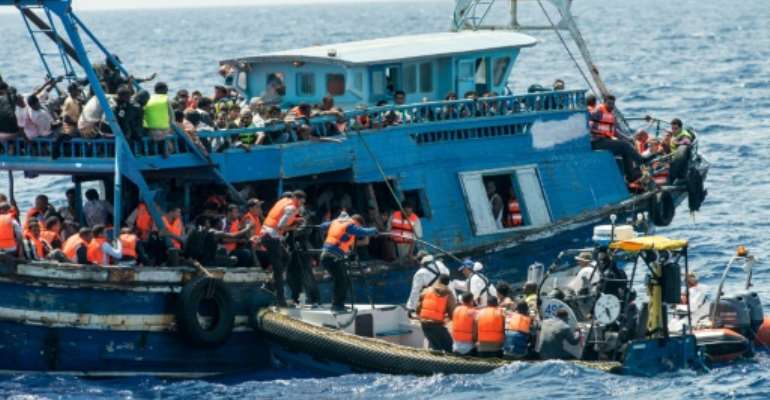 Migrants are rescued from an overcrowded wooden boat during an operation by aid organisation MSF and Swedish coast guards in the Mediterranean Sea on August 26, 2015. By Gabriele Francois Casini (Medecins Sans Frontieres/AFP)

Rome (AFP) - Italian authorities said Friday they had arrested ten suspected people smugglers in connection with the deaths by asphyxiation of 52 people who had been forced to remain in the virtually airless hold of an overcrowded migrant boat.

The arrests follow statements made by survivors rescued from the same boat earlier this week and taken to Palermo in Sicily.

When it left Libya, the rickety wooden boat was carrying a total of nearly 500 people. The suspected traffickers were seven Moroccans, two Syrians and a Libyan.

"All the statements by the migrants confirm the same version of events," Palermo prosecutor Maurizio Scalia told a press conference. "The victims were all violently forced to stay below deck in an awful condition."

A Canadian Doctors without Borders (MSF) physician who took part in the rescue described the horrific scene when he went on board the boat, in an interview with AFP on Thursday.

"I started checking people for signs of life, and I stopped counting after 24," he said. "It is not something that I want to do again."

According to the UN refugee agency, some 2,500 migrants have died tried to reach Europe by sea since the start of 2015.

Some 110,000 have reached Italy and a further 200,000 have made it to Greece, triggering an EU-wide crisis as many of them have attempted to make their way north to Germany and other wealthier countries seen as more welcoming to asylum seekers.