Red Cross appeals for restraint as Burundi unrest drags on 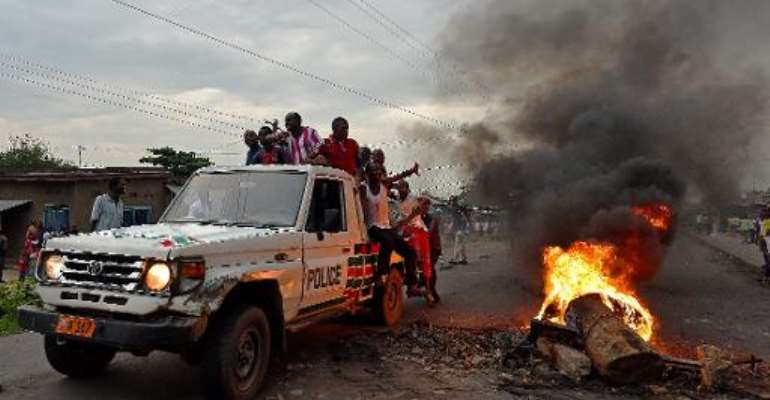 Protestors opposed to the Burundian president Pierre Nkurunziza's third term in office hitch a ride on a police vehicle past a burning barricade during a demonstration in the Cibitoke neighborhood of Bujumbura on May 19, 2015. By Carl De Souza (AFP)

Geneva (AFP) - The Red Cross on Tuesday called for restraint in Burundi in the aftermath of a failed coup and expressed "serious concern" over the continuing violence.

The appeal came as protesters opposed to President Pierre Nkurunziza's bid to secure a third term pressed on with demonstrations, prompting firing by security forces.

"We are very concerned with the consequences of the violence that is rocking Burundi," said Georgios Georgantas, the head of the International Committee of the Red Cross in the country.

In a statement issued in French, he called for all players to respect "lives and human dignity" and appealed "for restraint from all sides."

He said "the use of force should be limited to the minimum level" and stressed that medical facilities should not be targeted in the unrest.

At least 20 people died in weeks of street battles with security forces before demonstrations ended last week when generals launched a failed coup attempt. But protests resumed again on Monday.

Opposition and rights groups say that Nkurunziza's bid for a third five-year term in power is against the constitution and the terms of the peace deal that brought an end to the country's 13-year civil war in 2006.

The United Nations says more than 100,000 people have fled Burundi since early last month when the unrest began for the neighbouring countries of Rwanda, Tanzania and Democratic Republic of Congo.

The Red Cross said 400 children unaccompanied children were registered in Rwanda and 120 in Tanzania.