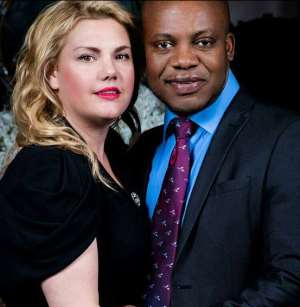 The lawyers had over the weeks been seeking freedom for their client from the Accra central magistrate court presided over by Ms Marian Affoh – where Pastor Adusah is standing trial for murder – but the judge had been denying them.

He is being tried over the death of his pregnant wife, Ms Charmaine Speirs, 41, which occurred between 18th and 20th March, 2015 at Mac Dic Royal Plaza Hotel in Koforidua, Eastern Region.

Charged with murder contrary to Section 46 of Act 29 of 1960, the plea of the accused person had not been taken by the court.

Bail
At the high court presided over by Justice A.K. Okwabi yesterday, the accused was granted bail in the sum of GH¢200,000 with one surety to be justified.

As part of the bail conditions, Pastor Adusah is to report to the police every Wednesday until June 18, 2015, by which time the court would have considered the next line of action.

Fundamental Human Rights
Ms Eva Otchere argued that the prosecution had been unable to link the accused to the crime, insisting that refusal of the bail would affect the fundamental human rights of the accused.

Richard Gyambibi, who represented the state, did not oppose the application for bail.

It may be recalled that the A-G at the last sitting had hinted that the state did not have enough evidence to try the man of God.

This follows an autopsy report on the deceased, Ms Speirs, from the Korle-Bu Teaching Hospital, dated March 31, 2015 and signed by Dr Afua Darkwah Abrahams, which indicated that the pastor's wife died of 'acute poising and opiate heroin' overdose, a banned narcotic substance.

No Evidence
The A-G in a seven-page advice on the case docket, dated May 3, 2015 and signed by Evelyn D. Keelson, said '…As already stated, even though we find some aspects of his behaviour suspicious, we cannot at this stage have sufficient evidence to hold him liable for the death of the deceased.'

It added, 'We therefore advise that he is granted bail. He should, however, continue to assist the police in conducting further investigations into the case.'

Background
Ms Speirs was found dead in the bathtub of the Mac Dic Royal Plaza Hotel in Koforidua where they both stayed when they visited Ghana for a religious programme.

The body of the pastor's wife was discovered days after he had checked out and travelled to the UKon March 18, 2015, while the woman was billed to check out on March 20, 2015.