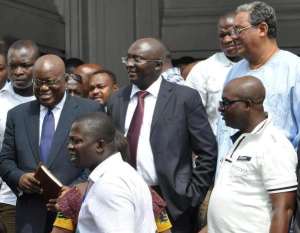 The committee in its report explained that the aspirant was disqualified on grounds of conflicting identity.

'After critically examining his particulars and documents presented, the following observations were made and those irregularities informed the committee's decision to disqualify him,' the report said.

Citing grounds for his disqualification from the race, the committee said 'given the documents and particulars presented to us by Isaac Amofa, it is unclear what the true identity of the aspirant is. We are not sure what his surname is. In one breadth it is Amofa, and in another breadth it is Kwabia.'

The disqualified aspirant was vetted along with the incumbent MP, Sarah Adwoa Safo.

Amofa, however, alleged that he was disqualified because his father was not a financier of the party.

'Even though I showed them my certificate, they still went ahead to disqualify me under the guise that I didn’t show the original certificate.

'Later on, I realised that I was disqualified because my father is not a big man or a party financier. I was asked by some of the members of the committee how I will finance my campaign and what my father brings on board,' he claimed in a radio interview.

However, the vetting committee's report, a copy of which is in the possession of DAILY GUIDE, pointed out that the aspirant presented several conflicting names to the committee, resulting in his disqualification.

According to the report, the aspirant, submitting his educational certificate, presented a Diploma certificate in Librarianship from the University of Ghana bearing the name Isaac Owireku Amofa, 'meaning Amofa was his surname.'

It said 'likewise, his expired passport that he presented as his proof of citizenship bears the name Isaac Owireku Amofa, meaning Amofa was his surname.'

The report indicated that 'a Senior Secondary School examination results slip presented to the committee by the disqualified candidate 'bears a different name, Amofa Isaac Owireku, meaning Owireku was his surname.'

'Following a request the committee made to the aspirant to choose one of his numerous names, the next day he presented a statutory declaration with sworn affidavits, dated 8th May, 2015, which sought to change his name officially to Isaac Owireku Amofa Kwabia; here, Kwabia being his surname,' the vetting committee's report, signed by Albert Boakye Okyere, Alfred Boye, Adu Bediako, Nana Oteng Ayisi and Elizabeth Ampomah, further stated.

Meanwhile, the report added that 'his tax clearance certificate which was acquired only three days after his statutory declaration was made on May 11, 2015, bore the name Isaac Owireku Amofa, his name he had earlier abandoned through a statutory declaration he swore on May 8, 2015, reverting his surname to Amofa.'

The report indicated that he had also earlier declared in the declaration section of the forms (Form B) of the NPP Nomination Forms that his name was simply Isaac Amofa, deepening the controversy.