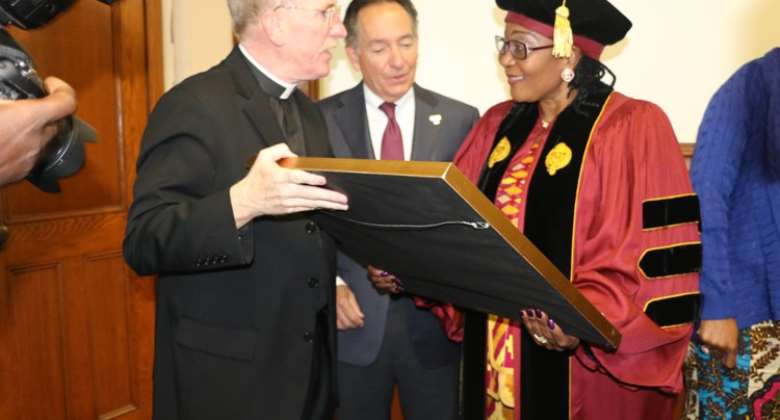 The Fordham University, one of the prestigious educational institutions in the United States of America today ( May, 16 2015) conferred an honorary Doctor of Letters on Ghana's First Lady, Nana Lordina Dramani Mahama in recognition of her prominent efforts to aid the most vulnerable citizens and help women and girls advance in the Ghanaian society.

Rev. Fr. Joseph Mcshane, President of Fordham University conferred the degree on her at the 170th Commencement of the institution at Fordham, New York.

A citation presented to the First Lady said in part that " For her many efforts to help the disadvantaged and create opportunities for women and girls, we, the President and Trustees of Fordham University, in solemn convocation assembled and in accord with the chartered authority bestowed on us by the Regents of the University of the State of New York, declare Nana Lordina Dramani Mahama Doctor of Humane Letters, honoris causa. That she may enjoy all rights and privileges of this, our highest honour, we have issued these letters patent under our hand and the corporate seal of the University on this, the 16th day of May in the Year of Our Lord Two Thousand Fifteen"

It also mentioned her passion for business and entrepreneurship apart from vigorous campaigns to prevent mother to child transmission of HIV and AIDS..

Earlier, Rev. Fr. Patrick Ryan, Professor of Religion and Society at the University presented the Diploma,caps gowns and academic hood to the First Lady.

A total of 4800 others were presented with degrees at the ceremony, which attracted a record gathering, including chiefs, Ghana's Ambassador o the United States, General Joseph Henry Smith and Former Senator Chuck Schumer.

Giving the Commencement Address,the keynote speaker, the First Lady, Dr. Nana Lordina Dramani Mahama, who is President of the Lordina Foundation dedicated her award to the hardworking women and the children of Ghana.

She said the recognition will motivate her and her organization to go out and do more in the society.

"As we disperse from here, we must define the relationship we want to have with our communities and our people.

"Many of us will find the definition of ourselves in the carers we choose as scientists, social workers, religious leaders, etc", the First Lady stated.

To this end, she charged the graduating class to make efforts to lend a hand to others, especially those who are less privileged than them.

Dr. Lordina Mahama who gave a picture of some the philanthropic work by her foundation at the Gambaga Witches camp and other orphanages to provide various forms of humanitarian assistance said that it was not good that in many parts of Africa, failure and misfortune is attributed to evil forces such as witchcraft.

"From unemployment, poverty, disease, barrenness,inability to find a spouse, mental illness right to the ultimate, which is death, all these are attributed to supernatural manipulation of witches", an emotional Dr. Lordina Mahama said, adding that "the camp reflected a classic example of society's ignorance and loss of humanity towards others".

Recounting the success of her campaign against the spread of HIV,and the prevention of cervical and breast cancers, The First Lady remarked for example that "there is a joy in looking into the beautiful eyes of an HIV-free baby born to an HIV positive mother. The stare you get from the little innocent eyes is enough reward for all our efforts".

In her words "the many women who avoid breast and cervical cancers every year through our screening programmes, awareness and advocacy and our championing of anti HPV vaccines for girls, is a reward greater than joy.

She described her interaction with the elderly women at the Gambaga camp as her most highly priced memory.

Fordham University was founded in 1841 by Archbishop John Hughes as a Jesuit Catholic University.