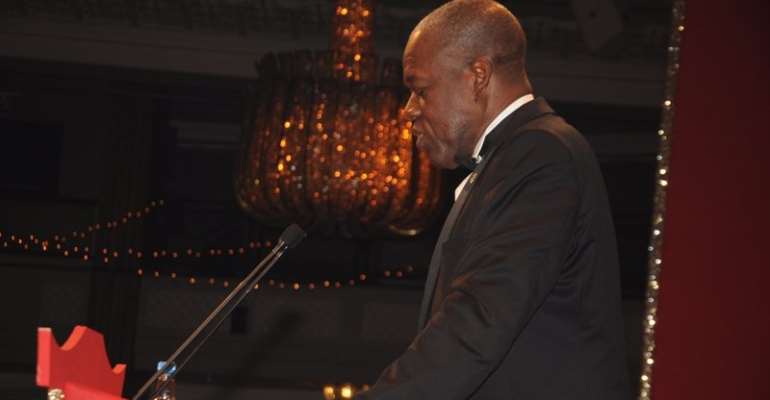 London, May 16 GNA - Vice President Kwesi Amissah Arthur has stated that Ghana is currently working to eliminate all forms of child labour on the cocoa farms.

He said consequently the government has introduced the Child Education Support Programme to ensure that schools in cocoa growing communities are rehabilitated and new ones built in communities where there are no schools.

Vice President Amissah-Arthur was speaking at a Cocoa Dinner organised by the Federation of Cocoa Commerce held at Grosvenor House, London, United Kingdom.

The dinner brought together around 900 people from the international cocoa community including key influential guest speakers.

The theme for year's dinner: "West meets East," with focus on West Africa as the world's leaders of cocoa producers and the growing importance of Asia to the global economy.

The Federation of Cocoa Commerce was established in 1935 in Paris to serve the growing trade in physical cocoa.

The objective of the federation is to develop a single robust commercial framework for the cocoa market, to achieve contract harmonisation and provide supporting services and education programmes.

Present at the ceremony was Mr Muhammed Jusuf Kalla, Vice President of the Republic of Indonesia, Mr Paul Boateng, former Chief Secretary to the Treasury and Mr Victor Smith, Ghana's High Commissioner to the United Kingdom.

Vice President Amissah-Arthur said the provision of educational infrastructure is to give opportunity to children living in deprived cocoa communities to have access to quality education.

He gave the assurance that the government is committed to improve road network in the cocoa growing communities combined with other infrastructural development in cocoa growing areas, which would help improve the quality of life which in turn would be an incentive for the youth to stay in the communities and engage in cocoa farming.

He said the government recognise it responsibilities to manage the cocoa sector by enhancing the farming productivity thereby protecting farms and livelihoods.

Vice President Amissah-Arthur also stated that government is committed to ensure that children in the country are protected from exploitation and to facilitate the adoption of sound environmental practices that protect the nation's forest reserves and water bodies.

He expressed the gratitude of the government to the federation for promoting, protecting and regulating the trade of cocoa beans and products as well as supporting and safe guarding the interest of its members.

He said Ghana is proud to be a member of the association and committed to develop a sustainable economy that improves the livelihoods of cocoa farmers who are important segments of the population at a time that Ghana continues to provide incentives and infrastructure that promise to create linkages that would benefit stakeholders in the industry.

Vice President Amissah-Arthur said since the introduction of cocoa into the country in the 19th century, the crop has dominated the economy and forms three per cent of the Gross Domestic Products.

It provides employment for almost a million farmers and a source of livelihood for millions of citizens in six out of the 10 of the regions with 20 per cent of Ghana's merchandise export.

He said the theme for this year's dinner reflects the prospects of increasing demands for cocoa products in the Asian region and how this demand impact on productivity in producing countries.

He said China chocolate's sales is projected to grow by 10 per cent per annum and strong growth is also expected in the middle part of the brick countries.

He said cocoa production in Central America is projected to remain strong whilst global consumption is growing between two to three per cent per annum and the current trend is believed to lead the current deficits of a hundred thousand tons by 2020 in producing countries.

Vice President Amissah-Arthur called on member countries of the association to invest in new farms through a climate smart approach as well as increase the productivity of exiting farms.

He said government recognises the challenge in helping the Ghana Cocoa Board to address the problem by initiating programmes that would guarantee the sustainability of cocoa production.

He said: 'Ghana as a country we have identified one of the challenges as the lack of motivation for the youth to embrace cocoa farming and take over from the ageing farmers.

He explained that currently Ghana Cocoa Board has initiated the youth in cocoa farming programme and a number of cocoa growing communities have been provided with seeds.

The programme is also aimed at identifying young men and women to engage in cocoa farming and also to attract new ones to take up the lucrative agricultural venture.

He said so far more than 30,000 young men and women are engaged in the initiative and are being supported with the necessary inputs including free fertilizer and agro chemicals as well as extension services.

Vice President Amissah-Arthur said presently the Ghana Cocoa Board in collaboration with certified bodies like the Rain Forest Alliance and Fair Trade has set up certification standards for cocoa production and members are educated on good agronomic practices in order to ensure sustainability of cocoa production whilst addressing environmental and ethical issues.

He said government has been active by providing direct support to farmers including cocoa spraying and extension services to farmers to educate them on good agronomic practices and prevent crop losses and the production of good cocoa.

He noted that the Ghana Cocoa Board has also initiated the cocoa rehabilitation and replanting programme to assist farmers to rehabilitate and replant old diseased and abandoned cocoa farms.

He said this year 50 million hybrid cocoa seedlings are being distributed to farmers free of charge and the programme would continue annually to ensure job sustainability.