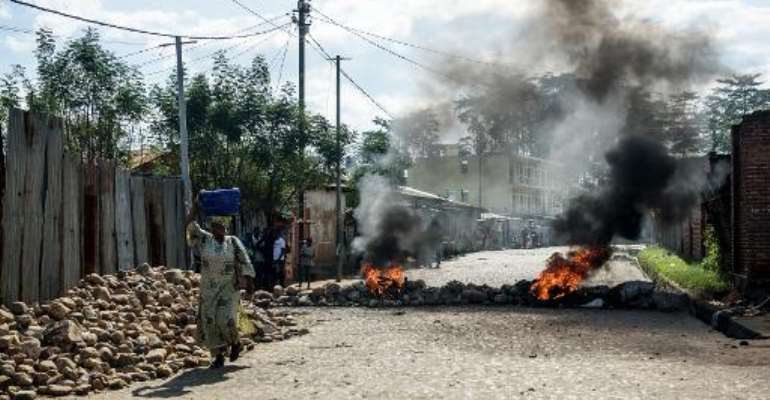 People walk past a burning barricade in Bujumbura on May 14, 2015, after a night marked by gunfire and explosions in various areas of the capital. By Jennifer Huxta (AFP/File)

Bujumbura (Burundi) (AFP) - Four Burundian ex-presidents have denounced President Pierre Nkurunziza's bid for a third term as "unconstitutional" and warned it "could jeopardise the gains of peace" made since civil war ended in 2006.

The four ex-presidents who signed the letter are Jean-Baptiste Bagaza, Sylvestre Ntibantunganya, Pierre Buyoya and Domitien Ndayizeye, who between them ruled Burundi from 1976 to 2005, when Nkurunziza took power.

Nkurunziza returned to the capital Bujumbura on Friday after a coup attempt to overthrow him ended in failure. He has insisted he will run in the presidential election slated for June 26.

Before the coup bid on Wednesday, weeks of daily protest against the president's third term bid left over 20 dead in clashes with police, and his four predecessors urged Nkurunziza not to run again.

"This decision would automatically end the demonstrations and violence... and would allow the organization of free elections," the letter read.

They also called on "regional leaders to help the president to make the decision that is right... the renunciation of the controversial third term."

The former leaders also warned that a third term by Nkurunziza could also "undermine the stability of the Great Lakes region."

Opposition and rights groups insist that it is unconstitutional for Nkurunziza, who has been in office for a decade, to run for more than two terms. The president, however, argues his first term did not count as he was elected by parliament, not directly by the people.

Violence has raised fears of a return to widespread violence in the impoverished country, which is still recovering from a 13-year civil war that ended in 2006 and left hundreds of thousands dead.