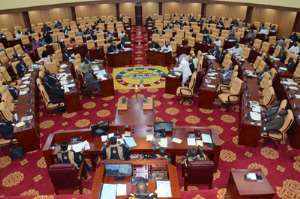 Some Members of Parliament led by the majority chief whip, Mohammed Mubarak Muntaka, yesterday vented their spleen on a section of the parliamentary press corps.

The journalists are said to have reported that MPs, in considering the Conduct of Public Officers’ Bill (2013) on Wednesday, had made it legal for public officials to receive between GH¢1,000 and GH¢10,000 as gifts in the discharge of their duties because it would serve their interest as MPs as well.

The majority chief whip on the second day of debate on the consideration of the Bill, said no Member of Parliament on the floor made any remarks concerning a gift of GH¢10,000 when the Clause Six of the Bill was being discussed on Wednesday.

According to Mubarak Muntaka, who is the National Democratic Congress (NDC) MP for Asawase in the Ashanti Region, the amount being quoted is rather in relation to assets that are exempted to be declared and those that are bound by law to be declared by someone holding public office.

He said the reportage by some media houses created the impression that the MPs had come up with a law that allows public office holders to receive gifts up to GH¢10,000; and the backlash that followed that news by members of the public seemed to tarnish the image of the lawmaking body.

The Bill defines ‘acceptable gifts’ to be received by public officers in the discharge of their duties as gifts that will not reasonably influence or result in the influence of the performance of public officers' functions.

The clause says that a public officer may accept any of the following gifts: (i) an undisclosed souvenir that does not exceed the value by regulations (ii) a gift from a relative on the basis only of that relationship (iii) a reduced membership or other fee for being a member of a professional body, where that reduction is offered generally to the members of that body and made known to the public, among others.

The majority chief whip said that 'public officer', as defined in the Bill, does not include only politicians or ministers but also civil and public servants in responsible positions, officer of the rank of Assistant Inspector of Taxes and above in the Internal Revenue Service and its equivalent in the Ghana National Fire Service, Immigration Service, Customs Excise and Preventive Service, officer in the Ghana Police, Prison Service and heads, accountants, internal auditors and planning and budget officers in finance, procurement departments of government ministries, departments and agencies as well as all district, municipal and metropolitan assemblies.

A member of the Legal, Constitutional and Parliamentary Affairs - the body which drafted the bill - Frank Boakye Agyen, New Patriotic Party (NPP) MP for Effiduase/Asokore, also expressed great worry about the misinterpretation by the public on gifts to be accepted by public office holders, adding that the committee would fine-tune every contentious aspect of the Bill for it to be accepted by all Ghanaians.

The Minister for Employment and Labour Relations, Haruna Iddrisu, said that 'gift', as defined in the Bill, must be properly defined in the Ghanaian context.

The Speaker, Edward Doe Adjaho, directed that Clause One to 13 of the Bill be temporarily suspended for further consultations and fine-tuning.

You're A Covenant Keeping Leader — Ahafo Chiefs To Akufo-Add...
26 minutes ago