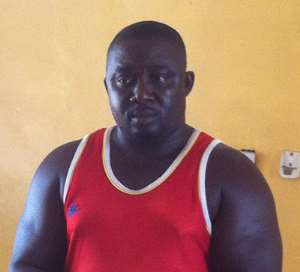 Suspect Eric Osei Boateng
THE ASOKWA Police in Kumasi have apprehended a man for tampering with a pre-paid meter in order to reduce its reading so that he will pay little fee.

The suspect, Eric Osei Boateng, was caught fidgeting with a pre-paid meter in his house at Asokwa in Kumasi, resulting in his arrest by the law enforcement agents.

The pre-paid meters are being installed at the Asokwa District by the Electricity Company of Ghana (ECG) on pilot basis and they would be extended to other areas following its success.

The police, who consider Boateng's action as a serious crime, would arraign him if he is indeed found culpable of tampering with the meter after investigations.

ACP Emmanuel Amissah, the Asokwa Divisional Police Commander in Kumasi, made these known during a press conference on Wednesday afternoon.

According to him, the suspect after tampering with the meter could not reload his meter which developed a fault instantly after it had been touched.

Boateng reported to the ECG that his pre-paid meter could not be reloaded so the ECG should come and rectify the fault in his house.

A technician of the ECG during an inspection of the pre-paid meter realised that the meter had been tampered with so he returned to his office to report.

When the ECG technician returned to Boateng's house, the suspect had engaged the services of another technician to rectify the faulty meter.

ACP Amissah said Boateng was apprehended immediately by the police to assist in investigations for tampering with the pre-paid meter.

The police chief described tampering with pre-paid meters of the ECG as a serious crime, warning that the suspect would be arraigned when found culpable.

Public Relations Manager of ECG, Erasmus Kyere Baidoo, sternly cautioned the public not to tamper with the newly installed prepaid meters of the ECG.

According to him, the new pre-paid meters are so sensitive that it would video anybody that tampers with it and also develop fault after it had been touched.

Mr Baidoo described the new pre-paid meters as one of the best meters of the ECG so far, noting that the meters could help stop tampering of meters.

The ECG capo bemoaned that tampering of meters by the people to reduce its reading had been a bane of the ECG for some time now.

He, therefore, said that the newly installed pre-paid meters would go a long way to stop illegal tampering of meters by the public.