Veep challenges MMDAs to be innovative 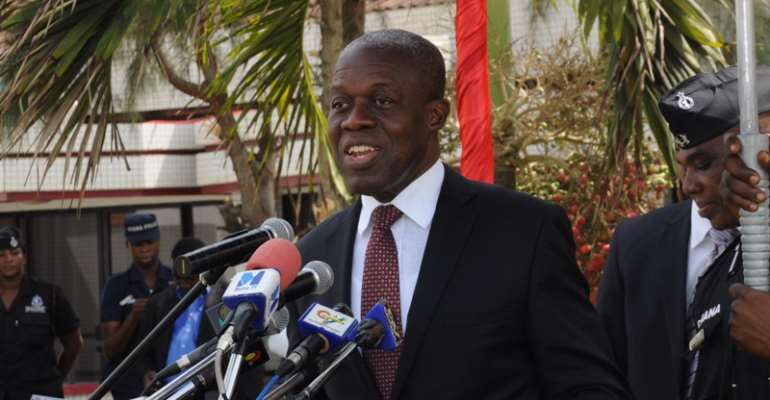 Accra, May 12, GNA - Vice President Kwesi Amissah-Arthur has challenged Metropolitan, Municipal and District Assemblies (MMDAs) to be innovative and find solutions to waste management problems in their respective areas.

He said government was ready to assist them if they were able to come out with a creative system to resolve waste management challenges and ensure clean environment.

Vice President Amissah-Arthur made the statement when he inspected a newly installed mini waste transfer station at Kokomlemle in Accra.

The new facility which is capable of handling 46tons of refuse a day, is a joint venture between Waste Land Fills Company and the Accra Metropolitan Assembly (AMA).

In August last year, Vice President Amissah-Arthur led a clean-up exercise at some 18 dumpsites within Accra as part of efforts to sanitize the city which has been engulfed with filth.

The move was to help reduce the impact of the cholera outbreak in parts of Accra and the deteriorating waste management and sanitation situation in the capital which at the time was identified as a contributory factor to the epidemic.

Some of the areas where the team of government officials had to supervise the collection of rubbish include the Agbogbloshie Market, Kokomlemle and Abossey.

Vice President Amissah-Arthur who expressed delight at the new mini waste transfer station, remarked that the current situation was an improvement over last year's.

He said the new facility was cleaner and more environmentally friendly and expressed the hope that it would help improve the health of people in the community.

He recalled that last year they had to come to the Kokomlemle dumpsite to clear the heaps of refuse there because at the time Accra had been affected by a Cholera outbreak, and so they had to do something to clear the filth in the system.

Vice President Amissah-Arthur also commended officials of the AMA for their innovation to create a clean dumpsite and urged them to replicate the system all over Accra.

He called on other cities to emulate the example of the AMA and establish their own waste transfer units in their communities.

He stated that the new facility was a joint venture which the AMA used the land as its equity whiles the private company invested its resources to put up the facility.

Vice President Amissah-Arthur further indicated that the people who were dumping rubbish at the facility were paying a fee, and that out of the proceeds the company was expected to recover its investment.

He said the arrangement was a win-win situation for both the AMA and the private investor.

Mr Alfred Oko Vanderpuje, Chief Executive of the Accra Metropolitan Assembly said the new mini waste transfer facility was capable of handling 46tons of rubbish a day, with 50 tricycles coming to dump refuse at the place.

He said as a result of the facility the people now carried rubbish on tricycles to the place. They had also become more organized, monitoring themselves and keeping the environment clean, he added.

Mr Vanderpuje commended Vice President Amissah-Arthur for his interest and support for the project.