Politicians and economists have no interest in environmental issues - WACAM 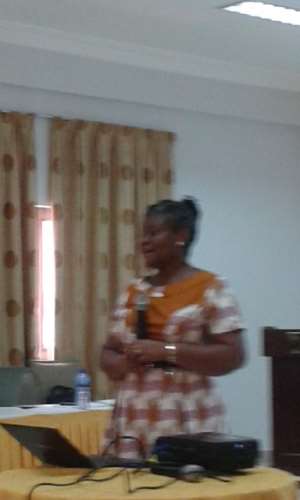 Accra, May 12, GNA - Mrs Hannah Owusu-Koranteng, Associate Executive Director, Wassa Association of Communities Affected by Mining (WACAM), has observed that politicians and economists have no interest in environmental issues.

She said the absence of pragmatic efforts by government and regulators to internalise the law of mining had contributed to the practice of irresponsible mining in the country.

'Politicians are not ready to take viable decisions on issues concerning the environment, and it is time citizens challenge government to streamline rules, regulation and laws of the game to check irresponsible mining as well as having leaders to care for our environment,' she said.

Mrs Owusu-Koranteng made the observation on Tuesday at a WACAM community engagement programme in Accra where citizens shared ideas, knowledge and views on mining and its effects on the citizenry, communities and the country at large and how to curb the canker.

The forum also saw the launching of a 73-page research report dubbed: 'The Right to Decide: Free Prior Informed Consent in Ghana (FPIC)' by WACAM and Centre for Public Interest Law (CEPIL) on mining in some communities.

Commenting on the effects of mining, Mrs Owusu-Koranteng noted that mining is counted among the 10 polluting industries and puts at risk the health of some 125 million people worldwide, especially those in the developing world.

'Poverty situation in rural community keeps rising as a result of mining whereas cemeteries are being mined, leaving cultural cost to society very crucial for community people,' she said.

She, therefore, called on government to place a moratorium on the granting of mining lease and undertake a cost-benefit analysis on the social economic and environment cost of mining.

She also appealed to community members to protect water bodies as they are being polluted by mining activities.

Mr Augustine Niber, Executive Director, CEPIL, called on government to take measures and comply with provisions of the Economic Community of West African States directives by internalising them into domestic laws on mining and oil and gas.

'Mining and oil and gas communities should advocate the recognition of FPIC in the country,' he said.

He lauded WACAM for the extensive approach that aimed at solving the mining problems in the country, especially in the rural communities where it had become a death trap.

'This study will further show the importance of FPIC in preventing conflict through active community participation in decisions affecting natural resource governance,' he said.

Mr Katako indicated that the research was carried out in miming communities in Ghana who are struggling to redeem their rights.

Participants called for the empowerment of communities and the public for effective participation in decisions relating to mineral exploitation to ensure proper management and utilisation of natural resources.