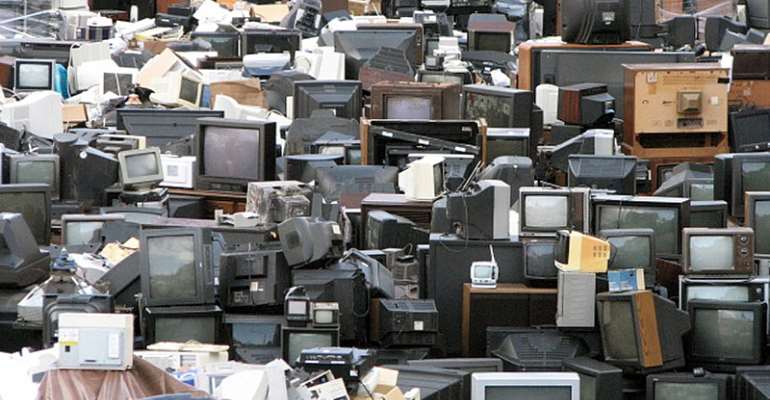 Hohoe, May 12, GNA - An estimated 90 per cent of the world's electronic waste, worth nearly US $19 billion, is illegally traded or dumped each year, according to a report released Tuesday by the United Nations Environment Programme (UNEP).

Each year, the electronic industry generates up to 41 million tonnes of e-waste from goods such as computers and smart phones, with forecasts saying that figure may reach 50 million tonnes already by 2017.

According to UNEP's "Waste Crimes, Waste Risks: Gaps and Challenges In the Waste Sector", launched today in Geneva, at the Conference of Parties to the three major conventions addressing the global waste issue, the Basel, Rotterdam and Stockholm Conventions, a staggering 60-90 percent of waste is illegally traded or dumped.

The International Criminal Police Organization (INTERPOL) estimates the value of unregistered and informally handled, including illegally traded and dumped e-waste ranges from US $12.5 to US $18.8 billion annually.

Achim Steiner, UN Under-Secretary-General and Executive Director of UNEP, said: 'We are facing the onset of an unprecedented tsunami of electronic waste rolling out over the world.

Not only does it account for a large portion of the world's non-recyclable 'waste mountain', but it also poses a threat to human health and the environment, due to the hazardous elements it contains.'

'Through enhanced international cooperation and legislative coherence, stronger national regulations and enforcement, as well as greater awareness and robust prevention measures we can ensure that the illegal trade and dumping of e-waste is brought to an end.

This will create a win-win situation, whereby rare and expensive elements are safely recycled and reused, boosting the formal economy, depriving criminals of income and reducing health risks to the public,' he added.

Innovative solutions to combat illegal and unsustainable handling of e-waste are emerging.

Recovering valuable metals and other resources locked inside electronic products, for example, can reduce the amount of e-waste produced, diminishing pressure on the environment, creating jobs and generating income.

The growing volumes of e-waste, municipal waste, food waste, discarded chemicals and counterfeit pesticides, all contribute to increasing pressure on the environment.

The report also points to the fact that every year, roughly one third of the food produced for human consumption globally, approximately 1.3 billion tonnes, worth over US $1 trillion, is lost or wasted.

The global waste market, from collection to recycling, is estimated to be worth US $410 billion a year, generating jobs and incomes. As with any large economic sector, it creates opportunities for illegal activities at various stages of the waste chain.

Currently, Europe and North America are the largest producers of e-waste, though Asia's cities are catching-up quickly. Africa and Asia are key destinations for large-scale shipments of hazardous wastes for dumping, and sometimes for recycling.

Ghana and Nigeria are among the largest recipients in West Africa, although high volumes of e-waste are also transported to Cote d'Ivoire and the Republic of Congo.

Export of hazardous waste from the European Union (EU) and Organisation for Economic Co-operation and Development (OECD) Member-States to non-OECD countries, is banned; therefore it is not subject to notification or licensing.

Inconsistency in regulations between exporting and importing countries - including what is classified as hazardous or contaminated waste - poses a challenge to effectively combating illegal waste trafficking.

Technical guidelines on the criteria used to classify equipment as waste or non-waste are currently negotiated at the international level.

Binding agreements on classification of waste through the conventions will be vital to preventing the dumping of waste in developing countries.

Insufficient control over waste removal is another loophole exploited by criminals, who collect payments for the safe disposal of waste, which they later dump or recycle unsafely.

Another source of income from illegal waste handling comes from recycling certain components, such as rare earth metals, copper and gold.

The discarded electronics are recycled in conditions that are hazardous to health, and typically lead to subsequent dumping of the majority of the waste.

Promoting safe recycling is vital to a better waste management.

It recommended strengthening national legislation and enforcement capacities; improve binding agreements on classification of waste; proceed with a technical assessment of quantities and qualities of abandoned containers and of dumping of hazardous waste worldwide as well as promote preventive measures, including facilitating the proper return of illegal waste shipments and at cost to shipper.

It recommended that countries reinforced awareness, monitoring and information by mapping of scale, routes and state of hazardous waste, and again strengthened awareness in the enforcement chain.