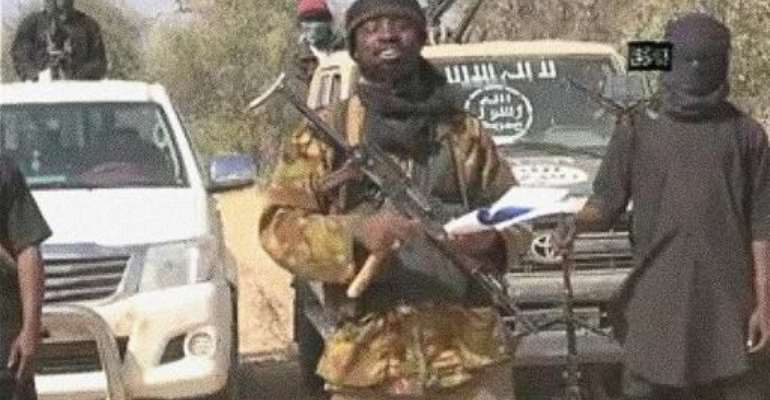 Boko Haram leader Abubakar Shekau is seen in a video released by the Islamist extremist group in January. By (Boko Haram/AFP/File)

Abuja (AFP) - Chad's President Idriss Deby has called for better coordination between coalition forces fighting Boko Haram in northeast Nigeria, warning that the group has been wounded but not defeated.

"If we still have to fight and catch (Boko Haram leader) Abubakar Shekau, the armies have to work together," Deby said on a visit to Nigeria's capital Abuja on Monday to meet outgoing President Goodluck Jonathan.

"Boko Haram has been broken but isn't finished," he told reporters. "Our weak point is we haven't been able to coordinate operations on the ground."

Nigeria's army has been assisted by the militaries in Chad, Niger and Cameroon since early February, which has led to a series of successes against the militants in the restive region.

Nigeria-based Boko Haram has led a six-year Islamist insurgency that has killed some 15,000 people and displaced about 1.5 million.

Towns and territory captured by the Islamists have been retaken and a major offensive has been under way for weeks in the group's Sambisa Forest stronghold in Nigeria's Borno state.

But Chad and Niger especially have complained that the Nigerian military has not stepped in to take over security after towns in border regions have been recaptured by their soldiers.

There have also been reports of Abuja wanting the neighbouring armies to withdraw from its territory, allowing in some cases the militants to regroup and come back in to liberated areas.

Deby, who has previously bemoaned the apparent lack of a joined-up approach, said Shekau had exploited the situation, allowing him to remain free from capture.

"If there had been better cooperation, Shekau would have been wiped out with all his commanders," the president added.

According to Chad, some 5,000 of its soldiers have been involved in the counter-insurgency and 71 have lost their lives.

On Monday, however, he congratulated Jonathan as a "great democrat" and "Pan-Africanist" for having contributed to the stability and peace of the region by conceding defeat to Buhari.

Deby also met Buhari on his visit but no details were disclosed about their discussions.