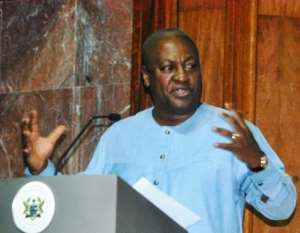 Accra, May 11, GNA - President John Dramani Mahama and his Ivorian counterpart Mr Alassane Quattara on Monday expressed their commitment to promote discussions that favour their integration in the West African Sub Region.

The two presidents have also agreed to consider delimitation as a major objective of the two countries.

These commitments were made in a joint communiquÃ© issued at the close of the meeting between the two heads of state Mr Kofi Annan, a former Secretary of United Nations in Geneva.

At the invitation of Mr Annan, the two presidents met on Monday in Geneva to discuss the dispute relating to the delimitation of the maritime boundary between the two countries.

Following the recent ruling by the Special Chamber of the International Tribunal for the Law of the Sea (ITLOS) on a request for provisional measures, the two presidents, have decided to engage in a process aimed at achieving cooperation as prescribed by the ITLOS.

The communiquÃ© said the two presidents thanked Mr Annan and his Foundation for facilitating the meeting and expressed their willingness to continue to draw on his vast and rich experience in promoting cooperation between the two countries.