Mahama Struggling To Redeem His Credibility 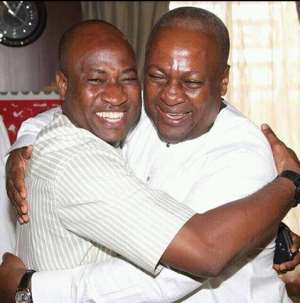 Former president Jerry Rawlings says the governing National Democratic Congress is likely suffer a major setback in the 2016 elections unless the leadership takes drastic action to weed out corrupt officials.

According to him, ““If advantage is not taken to do what needs to be done by the party leadership I am not too sure 2016 will be favourable”.

The former president was last week reported to have confessed at a recent meeting to not campaigning for President John Mahama in 2012. But in a statement issued over the weekend, Mr. Rawlings said his comments were rather twisted.

He said although it is public knowledge that he did not campaign for President Mahama neither did he campaign against him.

“I did not campaign for him, neither did I campaign against him so let’s give him his due and acknowledge the fact that he did most of the work by himself. This was the reality.

He continued: “This time round almost everyone’s political credibility has suffered terribly, including Mahama and that’s why I was saying that the new hope will now come from a re-invigorated and reenergised party machinery.

“If advantage is not taken to do what needs to be done by the party leadership I am not too sure 2016 will be favourable.

“So far the poor performance and corrupt characters are taking advantage of the support bases’ fear of the opposition to embolden themselves in perpetuating themselves and their crass behaviour. They have grown insensitive and do not seem to give a damn because they know the vulnerable and insecure electorate will continue to support the NDC because they are nervous of an opposition take over.”