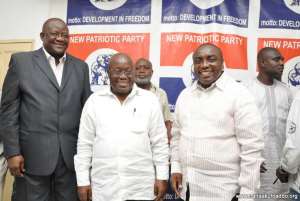 According to the leader of the aggrieved NPP youths, Mr. Akyirefi Ebenezer, “If the party qualifies them, it will be a breach of constitution and the party should be ready to see itself in court”.

“We the NPP youths in Ayumako- Enyan- Essiam pray to the Party leaders to act according to the party’s constitution. NPP is a democratic and a constitutional Party so the leaders should respect and act in accordance”, he said. Below is the press statement released by the angry NPP Youths.

In addition, Article eleven clause 4 (d) states that “A member applying for nomination as the party’s parliamentary candidate should be a registered member for the constituency which he or she seeks to represent and voter in the constituency”.

Mr. Chairman, if article eleven of the New Patriotic Party’s Constituency is valid, then I boldly say that , the above quoted clauses of Article Eleven (11) disqualify Mr. Kofi AffulTurkson and Mr. Ransford E.K. Nyarkoh are not ACTIVE members and not KNOWN in the constituency . In an attempt to persuade the Vetting Committee on the issue of being an ACTIVE member. Mr. Kofi AffulTurson presented a forged certificate given to him by his campaign manager who used to be the chairman in 1996. Mr. Kofi AffulTurkson claims it was issued to him after attending a workshop in 1996. As a matter of fact, the certificate was issued in 2000. By then, he Mr. Kofi AffulTurson was not in the country, he was in US.

Similarly, Mr. Ransford E.K. Nyarkoh has not been coming to the constituency till 30th April 2015 when he picked up a Parliamentary nomination form for the primaries on 30th April, 2015 at 4:48 and submitted at 6:00pm.

Mr. Chairman, both of them have never voted in the constituency before. I have personally checked from the Electoral Commissions office and I am fully satisfied that their names are not in the constituency voters register. According to the electoral commission officer who cross checked their names, “Mr. Turkson only came there to make a replacement of his missing voter identification card”.

1st MAY,2015.
REPORT ON THE THREE ASPIRANTS
By the provisions of the following article 11 clause 2(c), (d) and clause 4 (a),(b) and (d) of the NPP constitution . I wish to report on the eligibility of the following candidates who have applied to be Parliamentary Candidates of the NPP in the Ajumako- Enyan- Essiam Constituency.

They Sent 'Dante Crocodiles' To Our Area To Scarce Us — Ajum...
8 minutes ago

VIDEO: May Ken Agyapong Suffer From Paralysis And Be Numbed ...
27 minutes ago