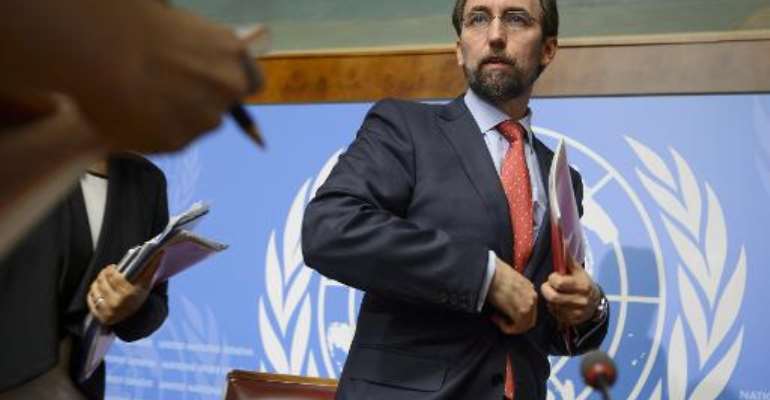 United Nations High Commissioner for Human Rights Zeid Ra'ad Al Hussein looks on after a press conference on May 8, 2015 in Geneva. By Fabrice Coffrini (AFP)

Geneva (AFP) - UN rights chief Zeid Ra'ad Al Hussein on Friday said France should have probed much earlier claims that its soldiers raped children in the Central African Republic between December 2013 and June 2014.

Zeid said the delayed response was all the more difficult to comprehend since people other than the accused must have known of the abuse but not passed the information up the military hierarchy.

"France now has an opportunity to set a really high benchmark of conduct," he told a news conference.

"It's not just simply prosecutions that must be undertaken but a very serious investigation into the force structure and why it was that these allegations were not being investigated by the French authorities at the time," he said.

Fourteen soldiers have been placed under investigation after six children alleged that some were sexually abused by French peacekeepers over a seven-month period.

French authorities launched an investigation after receiving a leaked internal United Nations report in July 2014 and sent a police team to the Central African Republic in August, but no soldiers or children were questioned.

Zeid said that, according to reports, one child was abused on "a road at 9 o'clock in the evening."

"How is it that nobody knew?" he said.

"Someone knew, some knew, aside from the soldiers and it would be junior officers, it would be an NCO (non-commissioned officer), it's impossible to believe it was only these soldiers acting with no one else knowing.

"Why was there a failure in passing up the information through the command and then to the rest of the forces?" he said.

Both the French government and UN have denied trying to cover up the potentially damaging scandal.

Anders Kompass, the Swedish UN aid official who leaked the report to France, was initially suspended from his job for "breach of protocol" but later reinstated.

Kompass is still, however, the object of an internal UN probe.

Zeid said the "abuses enumerated in the document was probably just the tip of what was more generalised behaviour" of wrongdoing, adding he was not necessarily referring to sexual abuses.

"This is the experience we have had in the past," said the Jordanian, who in an earlier job dealt with cases of sexual abuse by UN peacekeepers.

"When we look at the actions of soldiers in the field, if the command is weak ...what you find is actually the cases are far more frequent than you would have otherwise thought," he said.

"Abusing tiny bodies is surely the cruellest betrayal of trust on the part of a peacekeeper, whose very objective is to offer hope and protection to the community," he added.

According to the French defence ministry, 14 soldiers from a force deployed to help restore order after weeks of sectarian bloodletting are being investigated for the alleged sexual abuse of children, who had begged for food.

The abuse reportedly took place at a centre for displaced people at M'Poko airport in the Central African capital Bangui.