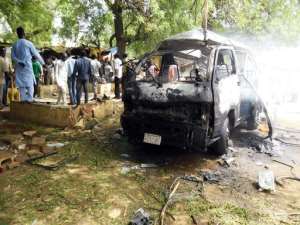 Kano (Nigeria) (AFP) - A gunman opened fire on Friday outside a school in northeast Nigeria's city of Potiskum, seriously wounding 12 students in an area repeatedly targeted by Boko Haram, a police officer and witnesses said.

"We have evacuated 12 people with serious gunshot wounds to hospital from the scene of the shooting attack," said the officer, who requested anonymity.

Many students at the College of Administrative and Business Studies (CABS) in Potiskum, Yobe state, said the attacker with explosives strapped to his body blew himself up when he ran out of ammunition, but the blast caused no other casualties.

Following a wave of attacks in the city, including on schools and colleges, students at CABS must pass through security screening before entering the campus.

The gunman fired on a crowd waiting at the gate to be screened shortly past 8:00 am (0700 GMT), witnesses said.

"We had just started a class when we heard gunshots coming from the direction of the gates and we instantly realised we were under attack which made us to rush out of the class," student Tijjani Musa said.

According to another student, Mustapha Umar, the gunman managed to pass through the gates amid the chaos that broke out after he began shooting.

"He kept firing sporadic shots," but was chased by a group of students who were frantically trying to subdue him, said Umar.

"When he ran out of ‎ammunition he detonated the explosives under his robe, killing himself but no one from the crowd," Umar told AFP.

While there was no immediate claim of responsibility for the attack, Potiskum has frequently been targeted by Boko Haram, which is responsible for leaving more than 15,000 people dead and another 1.5 million homeless since 2009.

The group's name means "Western education is forbidden" and its leaders have previously vowed to strike institutions that teach a secular curriculum.

Last November, at least 58 people were killed and another 117 injured when a suicide bomber attacked a student assembly ‎ground inside the Government Comprehensive Secondary School which is next to CABS.

That attack was blamed on Boko Haram.

One of the group's most gruesome student massacres also occurred in Yobe in September of 2013, when dozens of students were killed in their sleep at the Federal Government College in the town of Buni Yadi.

Nigeria's military has claimed a series of major victories over Boko Haram across the northeast during an operation launched in February with support from neighbouring Cameroon, Chad and Niger.

But experts say the insurgents remain capable of hit-and-run strikes, and may increasingly target soft civilian targets, despite being weakened by the military offensive.

President-elect Muhammadu Buhari, a Muslim northerner, won near total majorities in the region and has vowed to more effectively combat the Islamist uprising.

Buhari, who will be sworn in May 29, has said he will crack down on graft that has plagued military spending for decades and ensure that the security forces and intelligence services are better equipped.