UNESCO on awareness creation campaign on climate change in Ghana 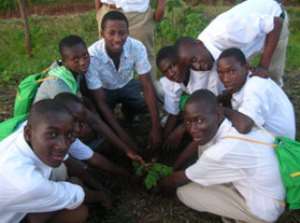 ‘’Unless we take steps to arrest climate change, we are heading towards catastrophic consequences that will be irreversible’’- Former UN .Sec. Gen. - KOFI ANAN………...

Established in May 2009 with not more than 60 members, the Kwadaso Agric College UNESCO club (KACUC) is helping to actualize the ideals of UNESCO.

Over the past years we’ve been and are still suffering from series of the adverse impact of climate change which is even predicted to be severe in the coming years with developing countries being the most vulnerable.

For that matter Ghana must take strong adaptive and mitigative measures in order to strive for livelihood and development.

The former UN Secretary General Kofi Annan puts it this way "unless we take steps to arrest climate change, we are heading towards catastrophic consequences that will be irreversible" and that is why the UNESCO club at the Kwadaso Agric College campus seeks to contribute it’s effort with a student led-initiative thus the Environmental Awareness Creation Campaign On Climates Change.

(EACCOCC). EACCOCC was mainly aimed at advocating for environmental sustainability by informing and building student communities to be environmentally friendly for sustainable development.

In early October 2009 prior to the campaign KACUC in collaboration with the Environmental Protection Agency (EPA) in the Ashanti Region - organized a training seminar programmer on climate change to prepare members for the campaign.

Mr. Daniel Benefo r a representative from EPA enlightened the members more on the impact, adaptation and mitigation process of climate change. He admonished the club to reach greater height with this campaign in the Ashanti region.

Millennium Development Institute, a non-governmental organization also supported us with tree seedlings for the planting exercise as planned.

The EACCOCC first begun at Agric LA Primary, Kwadaso and the Kumasi Secondary Technical School (KSTS) all around the Kwadaso community.

At each venue pupils and students were given interactive presentations on climate change.

They were educated on the impact being faced today all over the world as a result of the choices made many years ago.

And that as young people. Our action and interactions today towards the environment has a great impact in our future and that of the next generations.

The pupils and students were entreated to carry the message about climate change to their friends and families and how they can also contribute.

As part of the campaign a tree planting exercise was also undertaken, each led by pupils and students on their own campuses with volunteer support from the UNESCO club members.

The tree planting exercise was intended to instill the habit and stir their interest for planting trees which will go a long way in making a difference in our environment.

Amidst the challenges, the impact of EACCOCC includes;

PROSPECTS FOR 2010 AND BEYOND