Kufuor must not be afraid of the gun -JJ 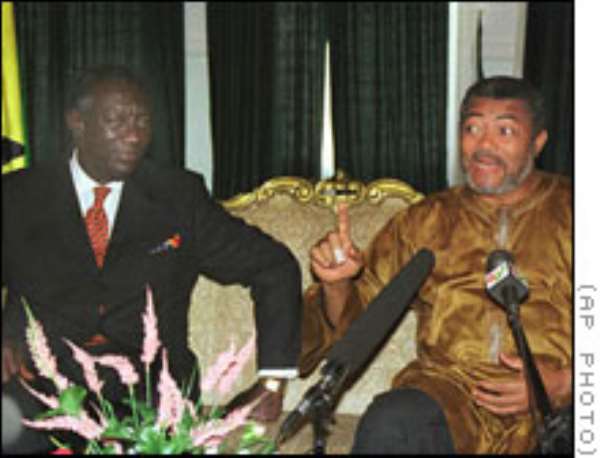 FORMER President Jerry John Rawlings has called on President John Agyekum Kufuor not to be afraid of the gun but rather the thumbs of the electorate that gave him the mandate to ascend the presidency.

“Tell Kufuor not to be afraid of any gun because the NDC does not believe in using any gun as they have been saying. He should rather be afraid of the thumbs of the people that he lied to before ascending the presidency,” he told a durbar at Mepe in the Volta Region last Friday.

Speaking as the guest of honour at the durbar to mark 50th anniversary of the enstoolment of Mama Awusi Sreku III, queen mother of Mepe traditional area, the former president said the Kufuor-led administration had sent the whole country into “hell” to the extent that the economic and social hardships could not be controlled.

Mr. Rawlings started his address by posing the question: “Is the elephant (referring to the symbol of the NPP) a bush animal or domestic animal?” When the crowd replied that it belonged to the wild, he retorted: “sack them into the bush in the forthcoming elections since the elephant is not a domestic animal.”

According to him, the NPP had lied to the people and now that they had realized that the ground was not fertile for them in this year's elections they had resorted to all forms of excuses that the NDC had plans to create chaos in the elections.

“We must not be influenced by them. I understand they have started influencing some people with money. Don't allow yourselves to be influenced. You will regret if you are influenced,” he said.

He said the NPP had no sense of justice. “I am not insulting President Kufuor.

But I am saying that they are insensitive to the plight of Ghanaians. If you don't even have a sense of appreciation how can God provide for you?” he asked, adding, “Let us tell them that we are also Ghanaians and that opportunity must be made available for us so that we can realize our potentials. The NPP has no respect for the conscience and sensibilities of the people. If they want to do politics and rule the nation, they should go to the opinion leaders to seek advice on how to govern this nation,” he submitted.

Flt. Lt. Rawlings who spoke in Ewe said it was unfortunate that multi-party democracy had brought division among the people. “We are all Ghanaians. God has not created anybody in any special way. When I was born, I was not born with a seat. The untold hardship is too much. My people tell your colleagues who are in the NPP to come back home, for the NDC is the best party that can restore the smiles in the faces of the people.”

Prevailing upon the people not to engage in any violent act that might disrupt the peace that the nation was enjoying, the former president said the NDC would not destabilize the nation just because it wanted power as being bandied about by the spin doctors of the NPP.

He condemned what he called the use of the military and the police by the government to torment the citizenry, stressing that such act could result in a revolution.

He said instead of developing the potentials of the people, individuals had become oppressors by the policies of the government. “Kufuor lied to the whole nation. Kufuor cannot get even a village chief because of his lies. I am not insulting him. I am saying the truth. It was good that the NDC lost the 2000 elections and we handed over to them peacefully. But what do we see now? We cannot pay our school fees; pay our electricity bills and many others. This time round, they know that they cannot win the elections and for that matter they have started deceiving you again.

Well what message do they have for you this time?” Mr. Rawlings dismissed the assertion that the NDC was recruiting mercenaries, saying the NDC did not need mercenaries or weapons to rule this nation.

He alleged that the NPP went to Germany to look for weapons but could not get them because they were asked to bring certificate from the ECOWAS, which they could not produce. According to him they later went to Israel to acquire some.

He accused the government of perpetuating social, economic and political injustices in the country, saying the jailing of former ministers who only performed their patriotic duties, demonstrated a complete disregard of the intelligence of the people.

The Volta Regional chairman of the NDC, Mr. Modestus Ahiable urged the people to prepare their thumbs to kick the NPP out of power in the December elections.

Mr. Samuel Ofosu Ampofu, the national organizer of the NDC and MP for Fanteakwa said the government's mismanagement of the economy had resulted in lack of job opportunities, citing Mepe as example where Aveyime Rice Project was situated but which was eventually halted for political reasons.

He said after the former president had demonstrated a sense of selflessness, dedication to the plight of the nation and above all had opened the way for democracy, the NPP had now put up democracy for sale.

“Let us rise up to resist such attempt. It does not auger well for democracy. Nobody is interested in the gun as it is being put across. Let us use a revolution of the thumb to sack them in December”, he charged.

The MP called on traditional, religious, civil society leaders to stand up against the threat to democracy by the NPP.

He bemoaned the rate of unemployment, the collapse of industries and the escalation of the guinea worm disease that was completely eradicated in the days of the NDC but which had now resurfaced, making Ghana the second most endemic country in the world.