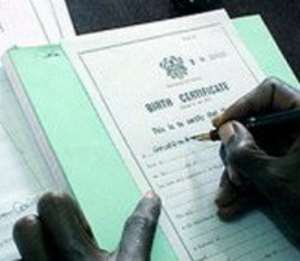 Accra, May 6, GNA - The Birth and Death Registry says it registered a total of 52,576 dead people nationwide in 2014, attributing the low figures to cultural and religious practices.

Of the total figure, 29,119 were males and the rest females.

Mr John Yao Agbeko, Registrar of Birth and Death Registry told the Ghana News Agency in Accra on Tuesday, that the low figures of death registration recorded in 2014 could be attributed to certain cultural and religious practices in the country.

He said information on the need for people to register the dead had gone down well with Ghanaians adding that some people were not willing to comply with it.

The Registrar observed that births and deaths registration play a very critical role in planning for the country's socio-economic development.

Mr Agbeko, therefore, appealed to opinion leaders, civil society organisations and the media to help in raising awareness on the importance of births and deaths registration.

The Registrar said the challenges facing the Registry are due to financial constraints and low staff levels.

Mr Agbeko appealed to government and the Ministry of Finance to allow the Registry to keep part of its non-taxable revenue of the internally generated funds for its administrative work.