Boko Haram refugees in Niger feel 'abandoned' by the world 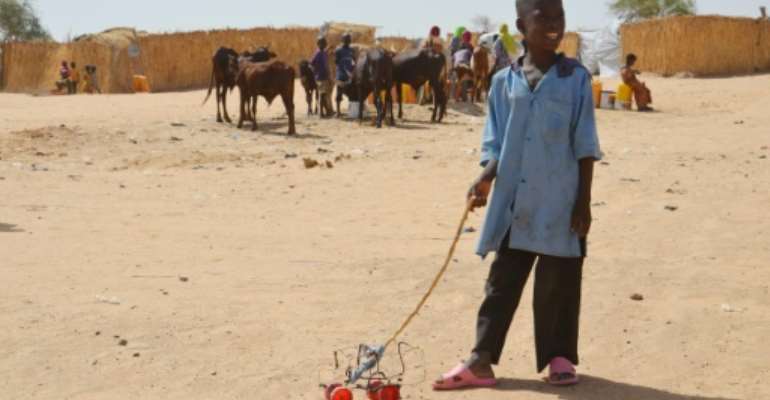 Conditions in the Assaga refugee camp in the southeast of Niger have deteriorated in recent months as food aid has struggled to reach its occupants who live with just basic medical care and schooling. By Boureima Hama (AFP)

Assaga (Niger) (AFP) - "Take us away from this hell," said Boussam, a mother of seven cradling skeletal goats in Niger's Assaga camp, where thousands of desperate refugees fleeing Boko Haram Islamist insurgents are living in hunger.

She spoke to AFP in the south eastern camp near the border with Nigeria where some 6,000 people are crammed in UN tents in baking sun after being displaced by the violence.

The size of the camp has swollen quickly since people began to arrive from mid 2015, having fled attacks that have engulfed the region as Boko Haram seeks to carve out a hardline Islamist state in the north east of neighbouring Nigeria.

Conditions in the camp have deteriorated in recent months as food aid has struggled to reach its occupants who live with just basic medical care and schooling.

The UN emergency relief coordinator Stephen O'Brien, who visited the camp this week, warned that the raging conflict has "catastrophically exacerbated" the vulnerability of the region's refugees, displacing people already dogged by chronic food insecurity.

Anger is rising in the camp that more is not being done to help them.

"I think that everyone has abandoned us," said Ibrahim, a refugee in his fifties.

Niger's humanitarian affairs minister Lawan Magadji, who accompanied O'Brien on his visit to the region, accepts that not enough aid has reached the camp.

"There is not enough food. Distribution operations are based on the neediest households," he said.

The UN Office for the Coordination of Humanitarian Affairs (OCHA) has blamed a lack of funds for the shortages.

Of the $316 million (283 million euros) needed to finance humanitarian efforts in Niger just under a quarter has been raised, according to the agency.

O'Brien has promised to raise funds at the World Humanitarian Summit in Istanbul, starting May 23.

And despite receiving a warm welcome from children in the camp, O'Brien and the UN have not yet eased the daily grind of life in Assaga.

"I am ashamed not to be able to feed my family properly," said Elhaj Moustapha, a once wealthy pepper grower forced into exile by the violence.

Mariam, a Nigerian refugee living in the camp, accosted O'Brien in person to complain about conditions in the camp.

"It has been four months since we last received food aid," she said

But an influx of cash may not be enough to improve her situation and that of others like her.

Several charities have warned that tough security measures imposed by Niger's authorities in its battle against Boko Haram have hampered the flow of food aid to Assaga.

Markets have been closed, the fish and pepper trades suspended and whole areas evacuated, placing a major toll on the area's economy, already under strain from chronic shortages.

Abdou Kaza, the region's military governor, insists the measures are necessary to cut off funds destined for the insurgents and will only be temporary.

But according to the UN, restoring normality to the region will be a herculean task.

Some 9.2 million people in the Lake Chad basin that straddles Niger, Nigeria and Chad are in need of food aid as the Boko Haram insurgency, launched in 2009 and responsible for as many as 20,000 deaths, continues unabated.