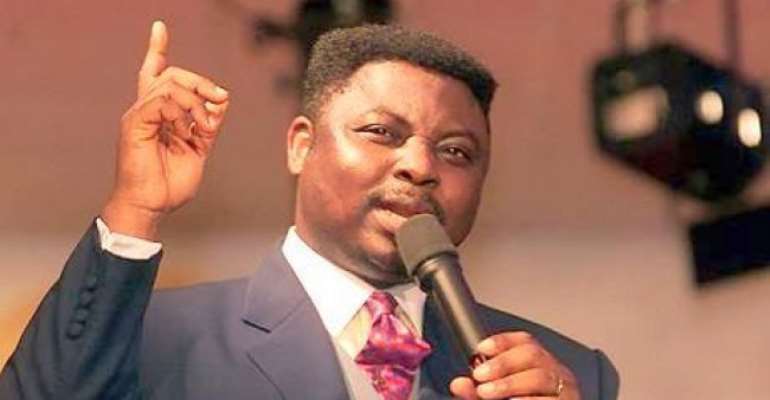 If it were that man learns from events of every day, by now some churches or spiritual houses of many Nigerians and Africans would have been deserted by their followers. This is simply because the prophets of those acclaimed houses of worship have proved beyond doubt that their gods or their own supreme beings can deceive by telling lies.

I read http://www.naij.com/425774-11-prophecies-from-nigerian-pastors-on-2015-elections-that-came-out-wrong.html... and was a mixture of confusion and sympathy over how “Men of God” claimed that God – their own, not mine or Reverend Father Mbaka’s – revealed to them the outcome of the Nigerian Presidential election of March 28, 2015 far before it was conducted and announced by the nation’s electoral umpire.

These prophesies were all preemptive because many Nigerians, even some who were with President Goodluck Ebele Jonathan, foresaw the sweeping tide encapsulated in the broom. Again, simply they were singing the tune of the piper’s payer. They had to justify the millions of naira given to them and any Nigerian – traditional, religious or political leader, sportsman, artist, physically challenged or juju – who cared to collect and show solidarity for continuity.

We can quickly recall that a serving governor declared before the election that pastors had been given heavy amounts of money to drum support for or coarse their followers to vote President Jonathan. Moreover, we can easily recall that President Jonathan suddenly turned a born-again Christian by going from one church to another seeking for “salvation”. It was a queer development. But it cannot be doubted that all the Churches he visited for that purpose benefitted from a presidential handshake, though they toiled in vain to execute his request or demand.

It will be fair to quote some of these men of God who have made a caricature of their gods. I prefer using the small letter “g”, because God (the Supreme Being) can never tell lies and can never deceive the believers in Him. The prophecy of Reverend Father Mbaka and the Catholics can attest to this. Mbaka spoke the truth and was nearly crushed by the power of incumbency. Many signals were enough but the fact remains that power is an intoxicant for the ungodly. Remember the Biblical parable and the role of Eve in the downfall of man. But however, we believe that God allowed it that way so that any evil plan against our fatherland – Nigeria – would end in vain. Who knows what would have happened if the traditional rulers, the athletes and others some of who were coaxed to fall in, had not collected what were given to them as bribes in order to support continuity.

The Catholic Bishop Conference of Nigeria (CBCN) showed support and wants General Muhammadu Buhari administration to tackle the nation’s political and economic challenges headlong. The News Agency of Nigeria (NAN) reported President of the CBCN, Most Rev. Ignatius Kaigama, saying: “Buhari should choose a team with proven integrity and commitment to project the common good of the country in order to enhance her prosperity. We continue to pray for better time in Nigeria in terms of security, employment for the youths, honesty in government dealings and improvement in infrastructure and facilities. But more importantly, there is a need for fundamental change of attitude from self centeredness to considering the interests of others before ours. We pray for Buhari and his incoming administration and that he and his team, which I believe will be carefully chosen both in quality and size, will contribute in healing the nation.”

Let’s start with the false declaration of Apostle Fredrick, Senior Pastor of Wonder City Chapel and President of the BB Frederick Ministries, Ghana. He claimed: “Nigerians should watch out for the second term of His Excellency President Goodluck Ebele Jonathan. Although it looks very challenging with him and his ruling party now, yet the Lord says Nigerians shouldn’t lose hope in Jonathan. As long as I’m concerned as a man gifted by God to see the past, the current and the future beyond the curtains of the natural, I know by the inspiration of the Almighty that President Jonathan is the set man for Nigeria. His next term on the seat will bring liberation to Nigeria. It will bring hope to hopeless situations in Nigeria. On this account I therefore declare that HE Goodluck Ebele Jonathan will win the coming elections.”

Pastor Matthew Ashimolowo, Senior Pastor of Kingsway International Christian Centre (KICC) went wild and declared: “For Nigeria, the Lord showed me who will win the election. I will not mention his name, because I have to be politically neutral. But when the president’s name is announced, 20 percent of a certain part of the nation will not agree. Eventually, after negotiation they will. We will agree that we’re one. Wales is only 400,000 people or about a million people. They call them a nation, and they call Yorubas who are 27 million a tribe, the Igbo who are 18 million you call them a tribe. For us to have many nations that make up Nigeria, it was God that made it happen. And that prophetic mandate still remains on Nigeria. Anyone who incites people to divide this nation will lose his chance. Nigeria will remain one. After all the noise, you will be amazed that also some politicians will be shocked, nobody will be ready to die for them. There

will be peace in Nigeria after the election. I see a man who will one day rise, but I don’t know when, I don’t think it’s up to 10 years though. He will turn the fortunes of Nigeria round. Nigeria will look like one of these advancing nations like United Arab Emirates, India, and China. That is how Nigeria will be.”

In his own godly proclamation, Prophet Joshua Iginla fired, “No matter how powerful or well-organized 2015 election is, it will be faulted. I am not a politician nor belong to any political party, I am just speaking God’s mind. The person sitting on the seat might not be perfect, but he will retain the seat. It’s not guess-work. However, it will be a battle between the lion and the tiger…Shortly after the election, especially on the night of the election, there will be great vandalisation. I see cars being burnt, lives killed. President Jonathan will win, but he has to pray about his health and so many political blows. I pray the two people who enter the Aso Villa will leave together. That’s why we should pray for the woman beside the president. The president and wife should pray that the first lady would finish the tenure together and not losing one before the end of their tenure.”

Apostle Johnson Suleiman submitted: “I see President Goodluck Jonathan coming back but trouble… Patience Jonathan needs serious prayers. 2015 presidential election will be rigged, marred in violence and end up in court case. 2015 election is another June 12. The man who truly won will not govern or rule.”

Another pastor, Primate Theophilus Oluwasaanu Olabayo, founder, Evangelical Church of Yahweh had this to say: “To start with God has revealed to me that there may not be elections next year because in 2015, we are going to witness one of the worst political assassinations in Nigeria. God further informed me that the South West geo-political zone should be very careful so that the region would not be thrown into another era of wild, wild west because I saw political assassinations everywhere. If there will be elections next year in Nigeria, the seat of the president is not vacant. God has revealed to me that if at all there is going to be presidential election, it will be inconclusive just like (the June 12,) that we had during the time of the late Chief MKO Abiola who flew the flag of the Social Democratic Party under the military administration of General Ibrahim Badamasi Babangida.”

As for Prophet Michael Olubode, he postulated: “I want to let the people of Nigeria know that the Lord will return His Excellency, Goodluck Ebele Jonathan to his presidential seat. Despite many hatred for him, it pleases the Lord God of Celestial to increase his tenure at the Presidential Villa in Aso Rock. The Lord revealed to me that the purpose of making him remain in government is to use him to build Nigeria’s economy. He will surely bring good luck to us.”

Moreover, Josiah Chukwuma Onuoha of Christ Foundation Miracle International Chapel, Lagos claimed: “The thing is that Buhari’s case will even be worse. Buhari has no grace to rule this country again. He is being pushed into it by selfish, diabolic elements. Let him go and seek God the way true Moslems do.” And Pastor Dapo Adeniyi stated: “Buhari has a good agenda to eradicate corruption in Nigeria. But it is unfortunate that he will not win the election, though he will give (APC vs PDP) Goodluck Ebele Jonathan tough time. He will accuse PDP of rigging the election, go to court but justice will not prevail. What a pity. I see him fainting and uncooperative to ensure the peace of Nigeria after his defeat.”

While Guru Maharaji declared: “There is no vacancy for Buhari at Aso Rock. President Goodluck Ebele Jonathan is the verifiable divine choice of the forthcoming presidential election. As the Living Perfect Master of creation in whose hands the fate of Nigerian project lies spiritually, I declare divinity’s decision to return Jonathan to Aso Rock over Muhammadu Buhari. I had publicly and sufficiently advised Buhari against nursing the ambition to rule Nigeria again. Superior forces are actually in-charge of the Federal Republic of Nigeria. I am at the helm of these great and unseen primordial powers of creation”, Dr. Okhue Iboi, National coordinator and spokesman of Witches and Wizards Association of Nigeria (WITZAN) fired: “I don’t see General Mohammadu Buhari ruling this country. We don’t have a political party but if anyone seeks our help, we shall render it. There was a time witches in Benue State invited other witches across the country to

offer prayers for the Senate President, David Mark, against impeachment. We flew to Otukpo and later to a village called Owetor. That was where we offered the prayers.”

Some of these false prophets even claimed that Muhammadu Buhari will die in office. This was a claim by a celestial Church leader. But the presidential election has come and gone successfully and has shown that the evil spirits had been the gods of these acclaimed men of God. The President-Elect, General Muhammadu Buhari will preside, not rule, over Nigeria for four years and he is going to be the Mandela of Nigeria, even more. In Nigeria today, the fear of General Buhari is the beginning of the required change and transformation Nigerians had yearned for.

God the Almighty has destined that Nigeria will witness this change under the leadership of General Muhammadu Buhari and He alone will guide, protect and grant the General the wisdom to pilot the affairs of our dear nation. Nigerian patriots must not be distracted by the evil prophesies of these businessmen. They must stand against the evil forces that may rear their heads against a just leader. They must join hands together and assist the government of this awaited Messiah to succeed. Just a matter of days and months, these acclaimed prophets will be put to shame as Nigerians will give testimonies on the benefactions which God will open up for Nigerians, Africans and the entire globe from the selfless service and grand vision and mission of General Muhammadu Buhari.

Muhammad Ajah is a writer, author, advocate of humanity and good governance based in Abuja. E-mail [email protected]