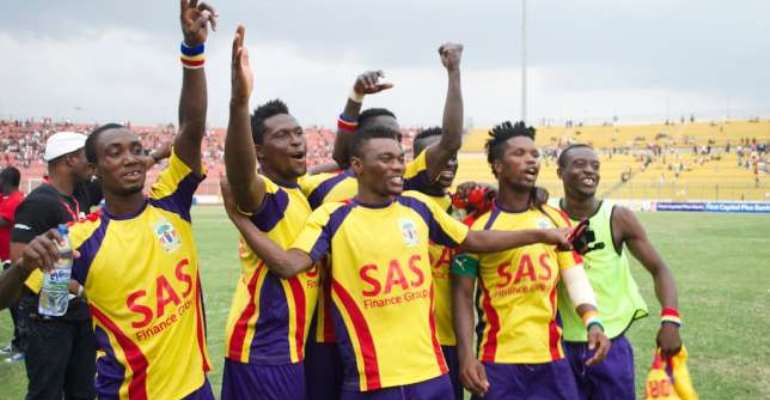 Hearts of Oak sealed a qualification into the next stage of the Caf confederation cup with a 2-2 aggregate despite losing 0-1 at home to AC Djoliba from Mali on Sunday at the Accra sports stadium.

An 87th minute header from Malick Berthe was not enough for the away side as they dominated the game from onset.

The Phobians look much comfortable as they went into the game with a 2-1 advantage but they were taught some football lessons by vintage AC Djoliba side creating chances and winning all the 50-50 balls but they failed to translate their possession into goals.

Hearts of Oak best moment in the game came in the 32nd minute after Paul Acquah shimmied pass his marker but had his wonderful strike hit the post. AC Djoliba used their height to their advantage as in most occasions they exposed the home side defense with their long balls as the first half failed to produce any goal.

In the second half, Hearts of Oak came into the game with a different mentality as they mounted intense pressure on the away side with Paul Acquah and Eric Kumi running through AC Djoliba's defense but the duo scuffed their shots wide whenever they went through on goal.

Djoliba immediately took control of the game as they nullified Hearts of Oak midfield and also used the left side of the Phobians defense as their main entrance into the home side's goal area.

The Tempo of the game increased but Djoliba was the better side among the two and in the 87th minute an inter-positional play from the away side opened defense of the Phobians as Malick Berthe headed home Falaye Sacko teasing cross, 2 minutes later Djoliba came close in fetching their second goal but a masterful defending from Vincent Atinga saved the day for the Phobians as the game was brought to an end after three minutes of additional time.

Hearts of Oak thus qualified to the next stage of the competition after 2-2 aggregate.