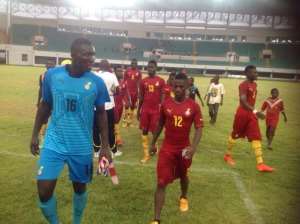 Black Meteors edged Liberia  by 5 goals to 1 to seal a double victory over Liberia in the Olympic Games qualifying match played at the Tamale Stadium on Saturday.

The Black Meteors who won 2-0 at the same venue last weekend in the first leg, secured their victory with an emphatic 5-1 scoreline in Saturday's second leg match.

The return leg which was also played in Ghana due to the Ebola situation in Liberia, saw Kotoko forward Dauda Mohammed grab a brace with Baba Mensah, Sadiq Alhassan and Liberty Professionals' Tamimu Montari all getting on the score sheet for coach Malik Jabir's side.

The Black Meteors are due to take on Congo in the second round, and Nigeria in the final qualifying match prior to the 2015 CAF U-23 Championship in Senegal in December.

The three top teams from the eight-nation tournament will qualify for the Rio 2016 Olympic Games.

What's So Special About NAM1 That Akufo-Addo Is Shielding Hi...
26 minutes ago