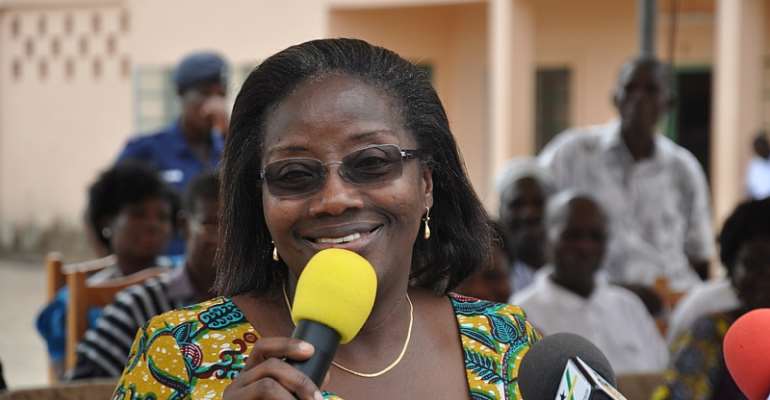 The Wife of the Vice President, Mrs. Matilda Amissah-Arthur, has called on school children in St Thomas Aquinas JSS in Kpando not to see the lack of certain infrastructure facilities in their school as making them disadvantaged because very soon most of their problems would be solved , so the need to take advantage of educational opportunities that abound in their areas seriously in order for them to become future leaders, because education is critical and key in nation building because Knowledge is power.

Mrs. Amissah-Arthur gave the advice on Thursday 30th April 2015 as part of her educational reform agenda by encouraging school children to read, when she donated educational materials including Library books to the Thomas Aquinas JSS in the Kpando Municipality in the Volta region.

She called on the children to see themselves as the future leaders of the country and praised them for their academic performance of the school scoring hundred percent in the BECE although they lack the necessary infrastructure , so the need for them use the opportunities at their doorsteps to learn hard and dream big must also be disciplined truthful honest in order for them to become responsible and better citizens in the near future .

The wife of the Vice President, Mrs. Matilda Amissah-Arthur, called on the children to continue with the shared Christian values by knowing God and use their lives as Christians as living testimonies, so that they can live worthy lives, show genuine love, be people of integrity, disciplined and obedient because with God the sky is the limit and that God gives wisdom .Adding that they must also be guided by the Bible which teaches good morals and truthfulness.

Mrs. Matilda Amissah Arthur praised the teachers in the school for the good academic performance adding that their hard work and vision and continuous role modeling in the area of educational infrastructure to befit the status of the school

The Member of Parliament of area Mrs. Dela Sowah on her part thanked the wife of the Vice President for her continuous gesture in the area of education and adding Kpando to it.

She also praised the headmaster ,teachers and pupils of the school for their continuous hard work in the area of education and also always making the municipality very proud by coming on top in terms of academic performance, adding that very soon government would put up a new infrastructure to befit the status of the school with amenities like library and a computer Centre.