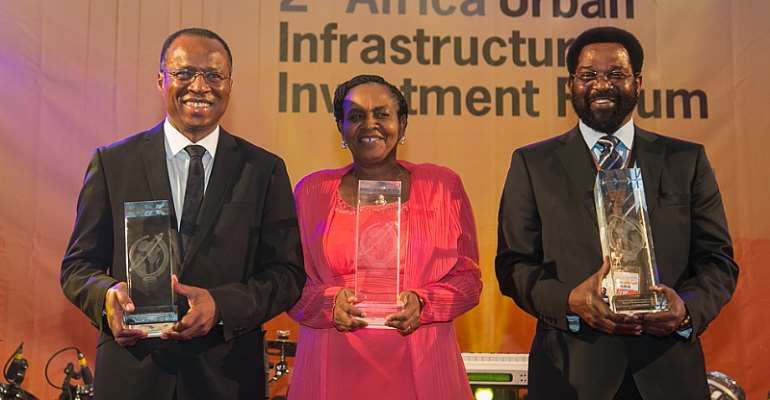 LUANDA, Angola, 1 May 2015 -/African Media Agency (AMA)/-The winners of the inaugural 2015 "José Eduardo dos Santos African Mayor Awards" have been announced in Luanda, Angola. These awards acknowledge the leadership and contribution made by Mayors of large, medium and small cities and celebrate achievements and excellence in urban development in Africa.

The formal presentation ceremony and a Gala dinner was hosted by Angola's Minister of State and Chief of Civil House in the office of the President, Hon Edeltrudes Maurício Fernandes Gaspar da Costa and attended by over 350 guests comprising government officials, city leaders, African mayors, investors and business leaders. The Awards took place in conjunction with the 2nd Africa Urban Infrastructure Investment Forum held from 29-30 March 2015 in Luanda, Angola.

Speaking at the ceremony, the Awards organiser and Publisher of African Business magazine, Omar Ben Yedder, said that the African Mayor Awards recognise, celebrate and reward City leaders or Governors who are helping transform Africa's growing metropolises. "The winning cities tonight are being led by individuals who are showing essential leadership qualities as they help build cities that work. And we will need more exemplary leadership, good governance and innovative thinking, whilst paying close attention to our culture and way of living when dreaming of the cities of tomorrow. Our leaders need to be close to the people, and our winners tonight are demonstrating these qualities."

Also speaking at the awards UCLG-A Secretary General, Jean Pierre Elong Mbassi Mbassi said: "The José Eduardo dos Santos African Mayor Awards aim to raise the profile of Africa's Mayors by honouring those who have made an outstanding contribution to their communities and developed a vision for urban living, working and travelling across Africa. Each year, outstanding African Mayors and municipal professionals from a large metropolis (1,000,000 residents or more), intermediate city (less than a 1,000,000 and more than 200,000 residents) and small cities (up to 200,000 residents) have the opportunity to win the prestigious Awards, which, this year are being supported by the Government of Angola, the UN-Habitat, the IC Publications Group and my own organisation, the United Cities and Local Governments of Africa (UCLG-A).

Mr Elong Mbassi added: "We hope that these awards will encourage other Mayors to think long and hard about what sort of cities they want, to engage with their communities and to contribute to developing sustainable urban cities in Africa".

In this inaugural year, the organisers commission a renowned Angolan artist to design a unique and inspirational trophy to capture the past, present and future of African cities. The piece represents courage and conviction as well as the urban challenges that African Mayors face in the future.

About the African Mayor Awards
United Cities and Local Governments-Africa (UCLG-A) launch first ever "African Mayor Awards" in Luanda to celebrate the achievements and excellence in the development of African cities. The African Mayor Awards programme recognises, celebrates and rewards City leaders who display exemplary qualities in leadership and vision, innovative thinking, management capabilities and integrity, social awareness, foster economic growth and development, ability to provide security and to protect the environment as well as the will and ability to foster good relations between communities from different cultural and social backgrounds. For further information please visit http://africanmayorawards.com .

About Angola
Angola began the slow but steady path to reform and rehabilitation when civil war came to an end in 2002. The Republic of Angola demonstrates the ability of African states to emerge from conflict and offer a secure and stable environment for reconstruction and development.

About the Angolan Ministry of Urbanism and Habitat

The MINUHA is the auxiliary ministerial department of the President of Angola with executive powers. It proposes the formulation, coordination, execution and monitoring of governmental policies in the areas of planning, territorial management, urbanisation and housing.

About UN-Habitat
UN-HABITAT is the United Nations agency for human settlements. It is mandated by the UN General Assembly to promote socially and environmentally sustainable towns and cities with the goal of providing adequate shelter for all.