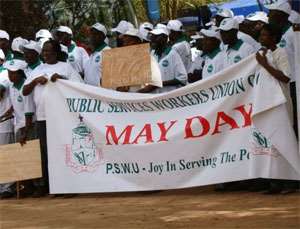 On this day set aside to celebrate workers worldwide, I salute all Ghanaian workers, both in the formal and informal sectors, for their enduring hard work and patriotic contribution towards Ghana’s development over the years.

This year’s celebration comes at a time when the current state of our country, under this NDC government, is in disarray. Today, our economy is in serious decline, evident in the $912 million IMF bailout package, which, as a result of government indiscipline, comes at a high cost to the Ghanaian people, including anticipated job cuts; widespread and rampant corruption which is robbing our nation of scarce resources; indecisive leadership; as well as the crippling effects of “dumsor dumsor”, which continues to cost the nation billions of Ghana cedis.

Ghanaians, and most especially workers, are bearing the full brunt of the mismanagement of the Ghanaian economy. Workers’ wages are only to see a 13% increase for the three-year period of the IMF bailout. This would, no doubt, make the Ghanaian worker poorer and poorer, as the cost of living gets ever higher than his or her take-home pay. Prior to this development, government, beginning this year, scrapped the 10% Cost of Living Allowance, despite the rising cost of living. Industries and small businesses are folding up because of “dumsor dumsor”, which has resulted in the loss of thousands of jobs. The Ghanaian worker is suffering. They deserve better and the President must set his priorities right and respond to their concerns with deeds and not words.

Despite all these difficulties, my message to the anxious Ghanaian workforce is this: stay faithful to the Ghanaian enterprise. A bright future awaits you. The NPP has shown, from 2001 to 2009, that we have the blueprint to ensuring greater employment and rapid economic growth. We have shown through our policies that we are far better in responding to the welfare of the masses. Under the NPP, Ghana saw a significant, unprecedented expansion of the national economy, which led to higher real wages and more jobs.

We remain committed to the enhancement of the dignity of the Ghanaian labour force. The structural transformation of the Ghanaian economy, with the goal of industrialising and adding value to our primary products, and an uncompromising adherence to value for money in the use of the public purse will be the means by which we will expand economic activity and public infrastructure to create the necessary numbers of high-paying jobs that will enhance the living standards of the mass of our people. The NPP is resolute in its commitment to building a society of opportunities for the Ghanaian people, which will provide good education, good skills, good jobs and good pay for all its citizens.

Together, we can build a nation that we can leave to our children and their children with pride and dignity. The wellbeing of the Ghanaian workforce and the future of their children are our priorities.