Farmers cry over 'juju' in their farms 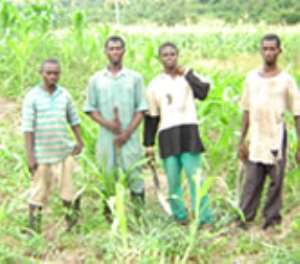 Adarkwa (E/R), April 28, GNA - Some farmers in the Adarkwa, Ntukum and Otwebediadua communities in the Suhum Municipality are crying over the use of 'juju' spell to destroy their farms by their competitors.

Farmers in the affected communities compete among themselves and believe that, when a farmer sees his or her neighbours farm flourishing than his or her own, it means juju' concoction has been applied.

To neutralise the spell the so called affected farmer walks on his or her toes through the farm of his or her neighbour with the hope that the flourishing farm would be hit by a strange disease after seven days.

Speaking to the Ghana News Agency, Mr Mark Kwaku Ofosu, a vegetable farmer for Dunamis Agro Ghana Limited at Adarkwah said, he was tasked by his company in September 2013, to cultivate a vegetable farm to no avail.

Mr Ofosu said, he had been paying each of his five workers GH¢ 170.00 per month, but due to crops failure he was compelled to lay them off.

Mr Samuel Nyamekye, another farmer at Otwebediadua was of the view that, the juju being used by their forefathers to destroy farms is still in force.

He said he planted an acre of groundnut last year and because somebody used the juju' spell on the farm, he had a very low yield.