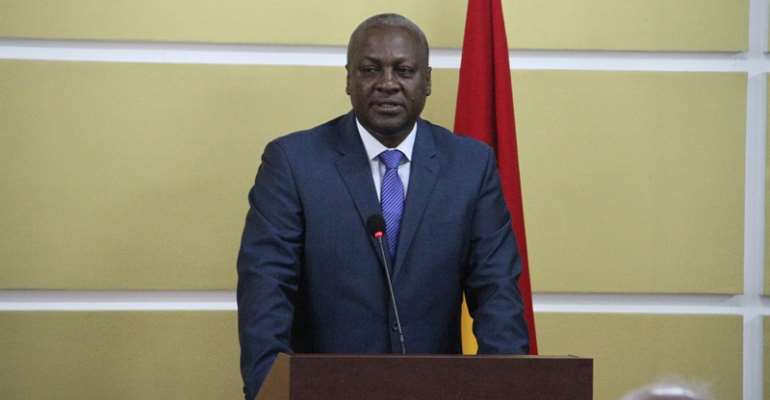 Accra, April 27, GNA - President John Dramani Mahama on Monday gave the assurance that his administration would leverage the partnership that exists between government and the church in the provision of development projects.

He said over the years, the church and other faith based organisations have been major stakeholders in the provision of educational, health, agricultural and sanitation facilities and expressed the hope it could be deepened for better standards.

"The church has over the years been a worthy partner in the provision of water, health, education and agricultural facilities and we shall continue that partnership for the benefit of our people," he stressed.

President Mahama gave the assurance when the leadership of the Evangelical Presbyterian Church called on him at the Flagstaff House, Kanda.

The leaders were at the Presidency to introduce their new Moderator, Reverend Dr Seth Senyo to the President.

President Mahama the church had been instrumental in the establishment of private universities throughout the country and called for the same partnership at the pre-school and basic levels to provide sound and solid foundation to the girls.

On health, President Mahama promised to restructure the National Health Insurance by addressing all the challenges that had bedeviled the scheme for sometime now.

The President said government would not compete with faith based health facilities by establishing more of such services at where they exist, but would rather facilitate the process to provide standard healthcare to Ghanaians.

He commended the church in their role in conflict resolution in the country and promised to continue using their services to achieve peace in some of the hot spots in the country.

Rev Senyo called on President Mahama to continue to intervene in the prolonged Nkonya/ Alavanyo conflict to ensure peaceful resolution in the coming years.

He pledged the support of his outfit in the provision of socio-economic development projects, particularly in the deprived areas of the country.