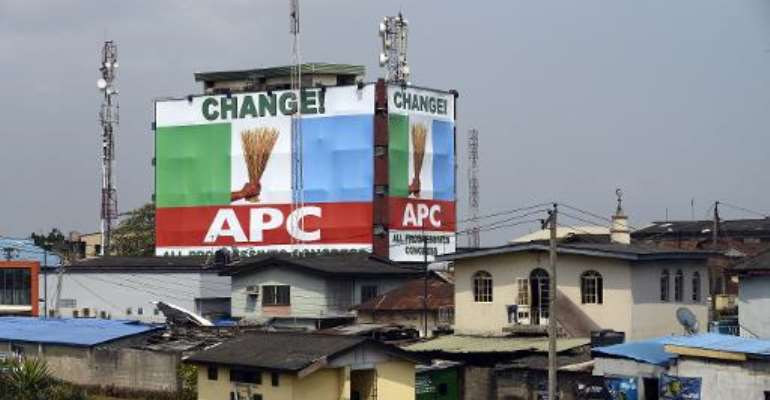 A campaign poster for the All Progressives Congress, the political party of Aisha Jummai Alhassan and incoming president Muhammadu Buhari, in Lagos on February 5, 2015. By Pius Utomi Ekpei (AFP/File)

Kano (Nigeria) (AFP) - Aisha Jummai Alhassan has lost her bid to become the first woman to be elected governor in a Nigerian state, but her party on Monday vowed to challenge the results in court.

A number of women currently hold extremely powerful posts in Nigeria's government, including the ministers of finance and oil, but activists remain discouraged by the absence of female leaders at the executive level.

The first election on April 11 was cancelled because of widespread irregularities.

"We don't accept the results declared by INEC (Independent National Electoral Commission) which is why I refused to sign the results sheet," said Abubakar Gambo Umar, the returning officer in Taraba for the All Progressives Congress party (APC).

"There were numerous cases o‎f fraud and irregularities in many polling centres where the re-run election was conducted," he added.

"We recorded many incidents of violence and intimidation‎," he said, vowing to "challenge the results in court to reclaim our victory."

The APC has won historic victories in Nigeria's 2015 election, including Buhari's win over President Goodluck Jonathan last month, the first time an incumbent was defeated by the opposition in Nigeria's history.

The APC also claimed a majority of governorship seats in Nigeria's 36 states, but the party had hoped that Alhassan could add to those gains by breaking the gender barrier.

A number of women currently hold extremely powerful posts in Nigeria's government, including the ministers of finance and oil, but activists remain discouraged by the absence of female leaders at the executive level.

Gender disparity rates in Nigeria's mainly Muslim north are among the highest in the world.

In a 2012 report, the British Council found that more than two-thirds of girls in the north aged 15-19 were unable to read a sentence.